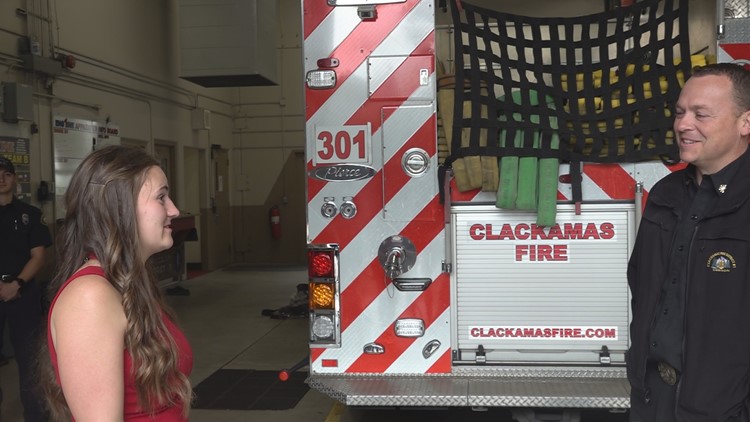 Ana Wakefield was hit by a stolen SUV on Highway 212 back in October of 2017.

CLACKAMAS COUNTY, Ore. — Five years ago, then 21-year-old Ana Wakefield was heading to basketball practice from her home in Clackamas county. Deputies said the driver of a stolen SUV crossed the center line on Highway 212 and slammed head-on into Ana’s car. The suspect 20-year-old Sequoya Storck was convicted on assault, DUI and leaving the scene. Storck was sentenced to eight years.

“I got hit head on on the highway by a drunk driver that was also on five or six different drugs,” Wakefield said.

“Underage and speeding with a stolen vehicle. It was a hit and run so he hit me and left me for dead.”

RELATED: ‘I have forgiven him’: Victim Ana Wakefield speaks out after DUII hit-and-run suspect arrested

After recovering from several brain surgeries, two broken legs and a collapsed lung, Wakefield still has a long road ahead of her. She visited the Clackamas County Fire Station to thank the first responders that helped her the day of the crash.

“Firefighters showed up to the scene and cut me out with the jaws of life,” Wakefield said.

“They helped to save my life so I am here today. I want to spend my five year anniversary telling the people who god put in my life to make a difference.”

Wakefield said she would not be where she is today without the first responders.

“It’s a long ways when you have to re-learn how to walk, talk, eat, sleep and breath,” Wakefield said.

Wakefield touched a lot of lives with her positivity.

There’s been a documentary produced about her life called “Fight Like Ana”. Her father said he’s proud of how far she’s come.

“Even through this whole ordeal when most of us probably would have been bitter and jaded, myself included, I look at her, and she’s got a forgiving heart, she loves life and loves people,” Dave Wakefield said.

Wakefield said she forgives the person who hit her. Her faith has helped her find peace with the situation.