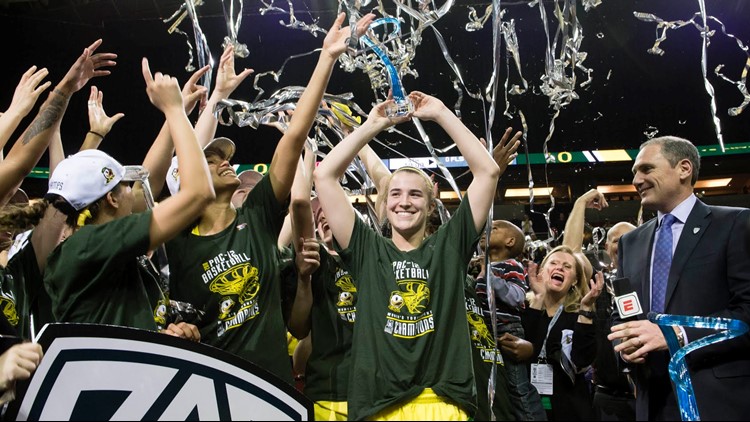 Former University of Oregon basketball star Sabrina Ionescu will be the guest picker on ESPN’s College Gameday show this weekend in Eugene when the Ducks face UCLA.

EUGENE, Ore. — Sabrina Ionescu, the former University of Oregon women’s basketball star and current WNBA standout for the New York Liberty, will be back in Eugene for the Top-10 college football matchup between the Ducks and UCLA.

Ionescu will be featured as the “guest picker” Saturday morning on ESPN’s College Gameday show, the popular pre-game college football show which is visiting Eugene this weekend. In a tweet Thursday, ESPN College Gameday announced that Ionescu was the guest this weekend.

The former Ducks star has broken many records and continues to achieve new milestones. She is the only NCAA Division 1 basketball player with 2,000 points, 1,000 assists and 1,000 rebounds — male or female. In addition, she leads all men’s or women’s players in career triple-doubles with 26, destroying the previous record of 12. She’s also Oregon’s all-time leader in the following categories: assists, three-point field goals, points and double-figure scoring games (134).

Ionescu was the first overall pick in the 2019 WNBA draft. In three seasons with the Liberty, Ionescu has averaged 15 points, 6.3 rebounds and 6.1 assists. Last season, she averaged 17.4 points, 7.1 rebounds and 6.3 assists. On July 6, she had 31 points, 13 rebounds and 10 assists in a victory against the Las Vegas Aces, recording the first 30-point triple-double in WNBA history.

We can’t wait to welcome @sabrina_i20 to our show in Eugene this weekend! pic.twitter.com/GczIyItGhu

ESPN College GameDay will be live from Eugene for a Top-10 matchup between Oregon and UCLA on Saturday morning. This is the first time since 2018 and the 11th time overall that the show has been hosted in Eugene. The Ducks are 7-3 in the previous 10 games that College GameDay has visited Autzen. Naturally, this brewed a lot of excitement from Ducks fans all over.

The last time the popular, long-running college football show came to Autzen Stadium was Sept. 22, 2018, for a matchup between No. 20 Oregon and No. 7 Stanford. Justin Herbert threw for 346 yards and CJ Verdell ran for 115 yards in the game, but the Cardinal rallied to win, 38-31.

RELATED: ‘We’re in the presence of a superstar’: Oregon students blown away by Sabrina Ionescu’s historic day

The initial GameDay news sparked various conversations on who the guest picker would be. Many people speculated online that it would be former Oregon men’s basketball and current Boston Celtics player Payton Pritchard. Even former Oregon men’s football quarterback and current Los Angeles Chargers quarterback Justin Herbert was inserted into the conversation as a potential option. Ultimately, there was a massive push for Ionescu as the guest picker.

EUGENE, WE’RE COMING TO YOUR CITY!

Next up, we’re headed to see @UCLAFootball take on @oregonfootball! pic.twitter.com/uRK5Mc2ZJP

Kelly Graves, head women’s basketball coach at Oregon, posted a tweet advocating for Ionescu as the guest picker, since Ionescu was already scheduled to be in Eugene to host two kids’ basketball camps with KidSport on Oct. 23.

It’s no secret that “The Duck” (or Puddles, to some), the University of Oregon’s beloved mascot, is considered the best mascot in show history. Adding Ionescu to the pregame show lineup is the absolute cherry on top for many fans.

Ionescu took the heart of the city in Eugene during her time at Oregon. She pushed Nike to make her jersey available in Duck Stores for fans to access, which also sold out the same day. This selection also emphasized the value of women taking up space in a male-dominated industry.

UCLA, led by former Oregon football coach Chip Kelly, is ranked No. 9 and will venture to Autzen Stadium to take on Dan Lanning’s 10th-ranked Ducks. Those coaches are at different places in their respective tenures but are in similar spots this week.

There is a lot of anticipation and excitement for this game, from Ionescu as the official guest picker on College GameDay, the coaches, College GameDay in Eugene and of course the Ducks playing — perhaps including GameDay host Lee Corso wearing the Duck mascot head again to pick Oregon to win.

College GameDay will broadcast live from Memorial Quad on the University of Oregon campus from 6 a.m. to 9 a.m. Pacific on Saturday. Kickoff is set for 12:30 p.m.