When Mike Tory, Vice President of Tory’s Roofing & Waterproofing, Inc. in Pearl City, Hawaii, needed a new roof for his family’s home, he had his mind set on Malarkey.

“I have been selling Malarkey shingles for the past 35 years with no problems. Over the past 50 years we have installed all the major shingle brands on the market,” said Tory. “I chose to use the Malarkey Windsor® Scotchgard™ shingles because it is a heavier shingle, it has NEX® polymer modified asphalt, and it looks different from all the other shingles on the market,” he added.

Not only does Mike have decades of experience in the roofing industry (including a Presidency with the Western States Roofing Contractors Association), it runs deep in his family as well. The company was established by Louis Tory, Jr. in 1972. They began by primarily doing residential roofs and quickly gained a good reputation for being an honest and trustworthy contractor. Today, all four of Louis’ children own and operate the company which consistently ranks in the top three roofing contractors in Hawaii, and the top 100 nationally. They have expanded from residential roofing to commercial, state, city and federal projects as well.


I chose to use the Malarkey Windsor® Scotchgard™ shingles because it is a heavier shingle, it has NEX® polymer modified asphalt, and it looks different from all the other shingles on the market 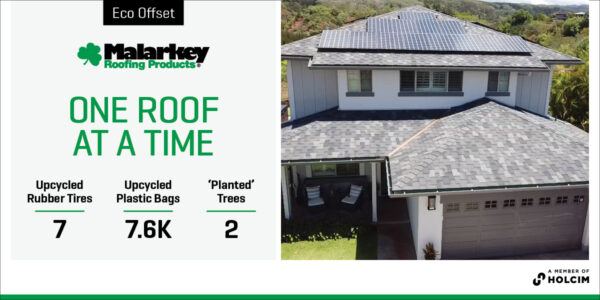 “This all started about six months ago. I planned to renovate my house before my daughter, husband and grand kids came back from North Carolina to live with us. I wanted to make the house nice for the grandkids,” Mike said.

The entire scope of work for the renovation project was extensive. The first tasks were to landscape the yard and install a hot tub. Next, the whole exterior of the house was painted to match the new Storm Grey color blend of the roof shingles.

To redo the roof, they had to carefully remove all 39 existing photovoltaic (PV) panels and save to reuse. Then additional preparations such as laying plastic around the perimeter and tearing off the existing shingles were completed.

The previous 13-year-old roof had shingles from another manufacturer. “[The] shingles may have been defective because they were losing all the granules to a point that the fiberglass was exposed,” said Tory. “This is why I decided to do my roof. I didn’t want to wait for a leak to happen,” he added.

From there, gutters were vacuumed and their joints caulked. Then fresh underlayment and new aluminum drip edging was flashed around the eaves and gables. The roof valleys received extra attention in this wet part of the world with both self-adhered underlayment and new copper flashing.

Now that the roof was finished, the PV panels were reinstalled with new QuickMount® components.

“Including the PV solar removal and reinstallation, installing the roofing was the last item to be completed for our house renovations. Just in time for my grandkids to enjoy,” said Tory.

Windsor® Scotchgard™ was the industry’s first designer shingle to be constructed of polymer modified asphalt, opening the benefits of this superior shingle-making technology to the highest shingle category. Crafted in the high-dimension, designer style, and made with a generous portion of Malarkey’s industry-leading NEX® Rubberized Asphalt, Windsor® Scotchgard™ shingles are up to 22% thicker than standard shingles. This yields up to 65% greater granule adhesion than industry standard (ASTM D3462). Since the Windsor® Scotchgard™ shingles include granules that reduce algae streaks and help clean the air of emission pollutants, reliable granule adhesion is essential.

“The Windsor® with Scotchgard™ and NEX® Rubberized Asphalt were a huge factor in my decision to use Malarkey shingles. It is very rainy and windy where we live. Having Scotchgard™ in the granules gives me peace of mind that the mildew will not be factor on our roof. As for the NEX® rubberized asphalt, I believe that it does make the shingles last longer than other brands,” he said.

Windsor® Scotchgard™ has twice the rain seals, and three times the wind seals of standard shingles.


Having Scotchgard™ in the granules gives me peace of mind that the mildew will not be factor on our roof. As for the NEX® rubberized asphalt, I believe that it does make the shingles last longer than other brands 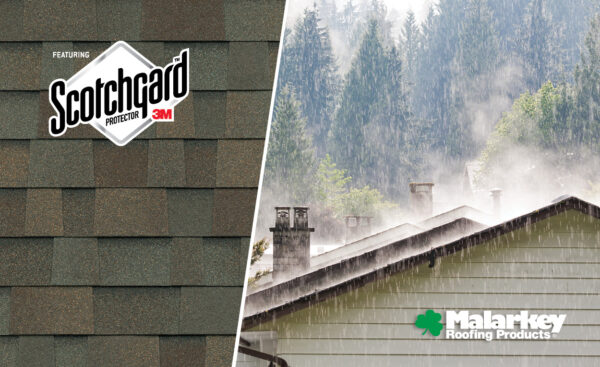 What’s so special about Scotchgard™?

Without algae protection, standard shingles can manifest black streaks in as little as three years. Humidity and sunlight create the perfect environment for algae growth. On a roof, this growth often manifests as black streaks that alter a roof’s color and mar its appearance.

To combat this problem, Malarkey utilizes copper-coated granules from 3M. These granules, which blend inconspicuously into the shingle’s color, are uniformly distributed on the shingle’s surface, and release copper ions which inhibit algae growth, preventing it from getting started in the first place.

When it all comes together

“The new roof and the house paint complement each other, so everything matches now,” said Tory. “We are really happy with the color and the design. It makes me happy when I come home and look at my new roof. I will recommend this shingle to my customers,” he added.

Each roof matters to us and everyone adds up to our greater goal of increased sustainability for the roofing industry. In a recent release, we shared news that since the launch of the world’s first smog-reducing shingle, Malarkey Roofing Products has provided the industry with enough roofing materials to protect more than 400,000 roofs. Because each roof has the smog-fighting capacity of two to three trees, that’s the equivalent of over 1 million trees of smog-reducing power. At this level, beyond the smog-reduction, the volume of upcycled tires and plastic bags is truly significant as well.

While we take pride in the scale of this achievement, it could not be possible without our loyal contractors who install Malarkey roofing shingles. In this ‘One in a Million’ (1 in 1M) series, we will profile some of the projects which have helped us reach this milestone of sustainability for the roofing industry.