‘Where’s everybody going to go?’: ODOT puts boulders along the freeways in place of homeless camps 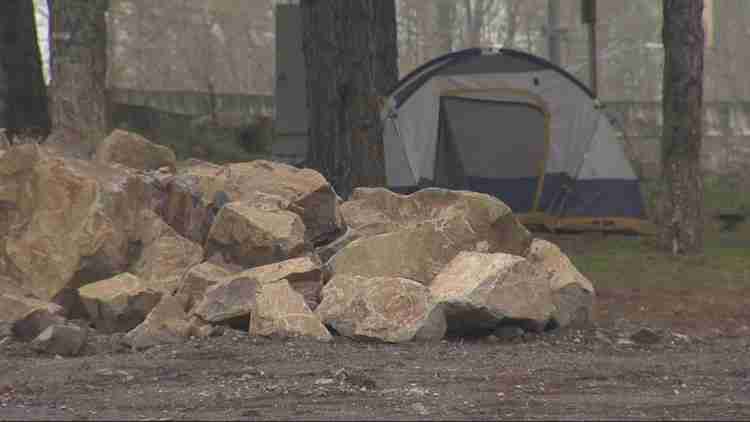 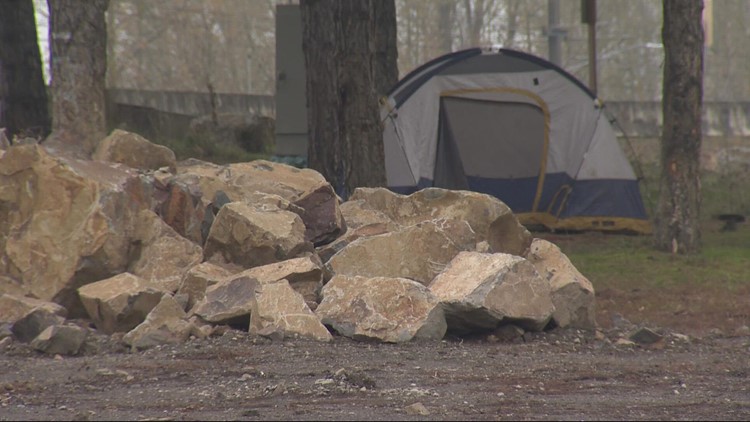 The Oregon Department of Transportation is spending hundreds of thousands of taxpayer dollars to keep homeless people off state property.

PORTLAND, Ore. — The loud bang of boulders dumped out of construction trucks was muffled Tuesday morning by the constant hum of the freeway. Along I-5 near Delta Park, Oregon Department of Transportation crews dumped piles of rocks in place of homeless camps.

They started using the tactic about four years ago and are bringing it back now that the weather is getting colder, and as more homeless camps pop up along the freeway.

“It’s kind of a last resort where we use these to try to make sure that the campers, the illegal campers are not on state property. This is especially dangerous in the winter when the roads can get slick and icy and cars can go spinning off the road,” said Hamilton. He said many homeless people have been killed by cars going off the road.

BOULDERS IN PLACE OF CAMPS | @OregonDOT is putting boulders along sections of I-5 to deter homeless people from camping there.

However, some of the campers insist that those safety concerns are the least of their worries.

“If that’s what they got to do to keep pushing us out, then so be it,” said Randy, who lives in a tent with his wife along I-405, right above the freeway. He ended up there a few weeks ago after city crews cleared his previous camp.

On Tuesday morning, they told him to move again. “We woke up to Rapid Response coming to the tent saying ‘Hey, we’re here to clean up all your stuff.’”

For years the city and the state have been trying to move people like Randy off busy roads. Mayor Ted Wheeler even declared an emergency order banning camping along high-crash corridors.

“I think it’s a little overboard, a little excessive just to keep camping from happening,” said Sean, who lives in a tent under an overpass near Delta Park. He was playing his guitar along the freeway Tuesday afternoon while Rapid Response crews cleared his site. “If they had an alternative that would be one thing. I don’t know where everybody’s going to go,” he said.

When KGW reporter Blair Best asked him if anyone from the city or the state offered him housing resources he said, “of course not … no they haven’t.”

“From the city and the state’s perspective they don’t want you guys camping out here because they say its unsafe,” Best asked him. “Do you feel unsafe?”

Sean replied: “Well, I feel unsafe because I now don’t have a tent over my head and it’s going to freeze again tonight.”

This is Randy. He lives with his wife in a tent along 405 above the freeway. They ended up here after city crews cleared their previous camp a few weeks ago. @KGWNews pic.twitter.com/I4Md2JrWcl

Also living on the freeway near Delta Park was Tom, who’s been homeless for seven years. He said that with the rise in crime in downtown Portland it’s safer to set up camp along the freeways.

“Everybody’s stabbing each other in the back downtown — out here I got friends,” Tom said.

ODOT is using hundreds of thousands of taxpayer dollars to install boulders and keep homeless people from camping on state property. They also try to help those who are displaced by handing out brochures that outline where homeless people can access services. However, for some that’s not enough.