Where have all the workers gone? Business leaders discuss Portland's labor shortage 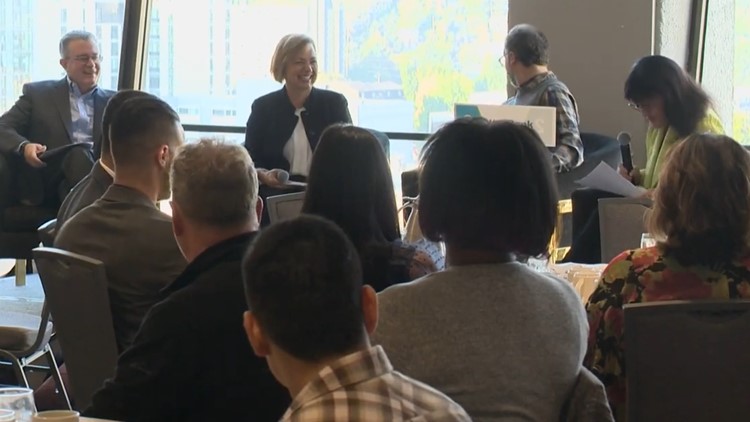 Nearly double the amount of baby boomers are leaving the workforce than those in their 20s are entering it, according to an Oregon economist.

PORTLAND, Ore. — Economists in Oregon say the state’s labor shortage is not related to the pandemic but something that’s been going on for years.

So where have all the workers gone?

“They all got jobs,” said Oregon economist Christian Kaylor to the group of business leaders.

Portland tied for the 3rd fastest job growth in America with Miami and Riverside with a 5.7% job growth rate for the 12 months ending in August. (Among major MSA’s.)

Despite the job growth, those positions aren’t getting filled as quickly as they used to. That’s in large part due to the lack of employees available.

Combine that with younger generations not having as many children as before.

With that gap, businesses need to think outside the box and get competitive.

Detrick said his company started focusing on efforts on what he called, “Train to Retain.”

“What we found was we needed to create a career path for people that came in at entry level positions who wanted to grow and wanted to make more money,” Detrick said.

“What are the other barriers to entry — and sometimes we can’t see them because we’re so used to having our certain requirements for a job and not realizing that those requirements are cutting out a certain segment of the population,” she said.

Kaylor said in order to fix the labor shortage, two things need to happen. First, businesses need to go towards more automation, which is something that is currently happening with self-checkout lanes and self-order kiosks at restaurants.

Second, Kaylor said people need to start having more kids. He said Portland is doing better than the national average, growing its age population by 8% over the past 10 years, compared to 3% for the country.