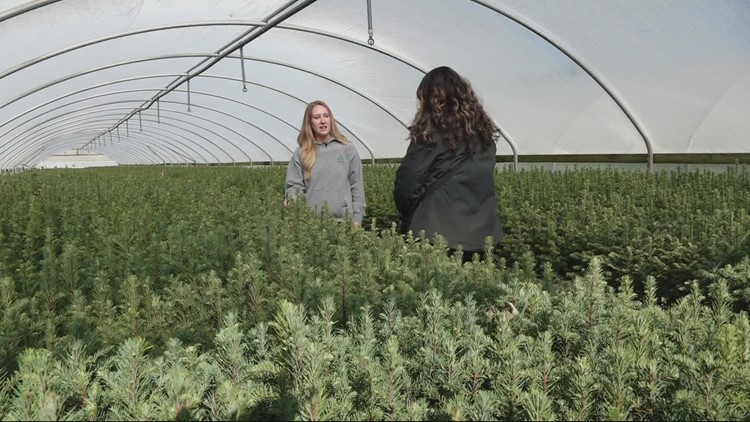 Weyerhaeuser’s nursery is in charge of 10 to 12 million seedlings, many of which stay in Oregon.

TURNER, Oregon — The Weyerhaeuser Turner Nursery, located around 20 miles south of Salem, has been growing Christmas spirit for decades. Inside their massive greenhouses are rows of tiny fir trees that start their lives at the nursery.

“We grow them for a year and they go out to the customer,” said Anya Hall, Weyerhaeuser seedling sales professional. “And then they plant them in their tree farms, anywhere from 7 to 10 years before they’re a full-size, ready-to-go-home Christmas tree.”

But it’s a lot more work than one might imagine. Within their 8- to 10-acre nursery, Weyerhaeuser is in charge of about 10 to 12 million seedlings. They include Fraser, noble, Douglas, Nordmann, Turkish and grand fir — many of which stay right here in Oregon.

To put the scale into perspective, there are 83,000 Christmas tree seedlings inside each of their greenhouses. Their nursery is home to 2.7 million Christmas trees at this facility alone.

RELATED: Christmas trees are big business in Oregon and this year prices are up

“Every one of these trees gets touched by somebody at this facility,” said Hall. “From the seed to where they’re hand-placed in a bag. So there’s a lot of time and care that goes into it.”

Hall says the record hot temperatures this summer killed off a lot of younger trees. It has put pressure on nurseries this year to increase their numbers; giving Hall and the Weyerhaeuser nursery team even more motivation to grow the best Christmas tree possible for Oregon families.

“We feel honored to grow a product that stays in Oregon and that ends up being in someone’s home during such a special time of year,” said Hall.

So, are we going to pay more this year?

Hall said that from the nursery perspective in Oregon, they have a bit more wiggle room with the pricing since many of these trees stay here locally.

“So it’s local, it’s less trucking, it’s less handling on the tree,” said Hall. “It’s just way more economical and sustainable to be growing them internally like this.”

But growers have told KGW that with fertilizer costs, fuel for tractors and chainsaws and higher labor costs, prices will likely still be higher. On average, expect to pay $2 more per foot for a Christmas tree this year. An 8-foot tree last year that was priced at $63 could cost around $80 this year.