‘We don’t want to be here’: Homeless youth in SW Portland struggle to get off the streets 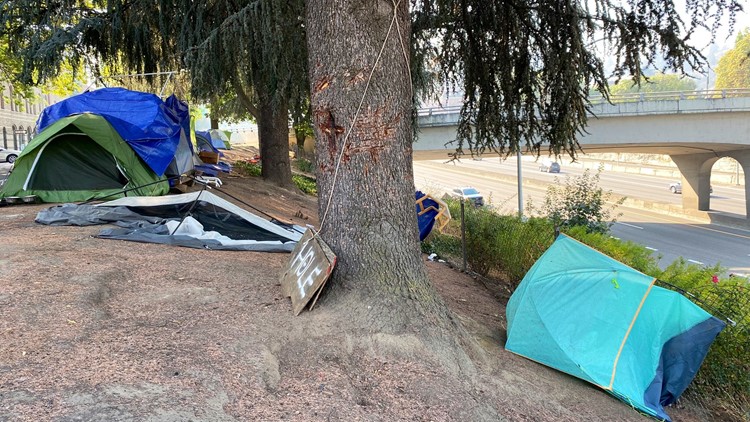 Dozens of homeless youth camp across the street from Outside In, a homeless youth resource center. Though frequently posted for removal, the camp endures.

PORTLAND, Ore. — The tents lining Southwest 13th Avenue between Main and Salmon streets make up one of Portland’s perennial homeless camps. Hundreds of people drive past it every day. However, there’s something that stands out about those living in these particular tents: everyone is under the age of 25.

“I am just trying to get my life together,” said David Ortiz. He’s 21 years old and says he doesn’t camp here by chance. He chooses to put his tent here so he can access the services offered at Outside In, the homeless youth resource center located across the street. “It’s a vital resource for all of us — for our well-being.”

“Our model is that we will meet people where they’re at,” explained Brian Sexton, Outside In’s director of youth services. “There is a bit of sense of community and safety when they are so close to our services.”

Many of the youth camping across the street go to Outside In for everything from food and shelter to addiction treatment and mental health services.

“We don’t see it as enabling, more as caring for those who are experiencing homelessness in our community,” Sexton said.

The top two floors of Outside In are transitional housing for about 30 people. Many of those camping across the street are waiting for a room to open up. Meanwhile, they use the center as their physical address.

HOMELESS YOUTH | Dozens of young people camp along SW 13th Ave so they can access services from Outside In.

“An address for food stamp cards, bus passes — they all need a place like this to go to since they don’t have a physical address,” added one man who advocates for those camping along Southwest 13th Avenue.

“It’s counseling, it’s medical treatment, it’s food, it’s everything that you could possibly need,” said one homeless woman who has been living there for three months.

She said the proximity to Outside In is her saving grace.

“I’ve achieved a job since I got here, I’ve been working with Outside In on housing lists and will be in a house like very shortly,” she said.

The camp has been posted for removal by the city of Portland twice in the past six months. The latest was in early September — however, the tents remain. The city told KGW that due to needles and garbage, the site is considered “high-risk.” It’s also located along a high-crash corridor and a Safe Route to School, which both fall under Mayor Ted Wheeler’s emergency declarations and would ordinarily slate it for comparatively swift removal.

“I don’t know why they would deem it unsafe now — they’ve posted us about 20-something times and that’s just in the course of like 18 months,” said Rebeckah Haug, who has lived there for about two months.

“I have literally no family in this state. I have no supports. I’ve been on my own since I was five years old,” Haug continued. Like the others, she’s working to get off the streets. “It’s not like we want to be here, we don’t. We want to be like every other working member of society.”

“It’s not ideal for folks to be camping, but really it comes down to the city coming up with better long-term solutions,” added Sexton.

Outside In is using money from Measure 110, which has finally resulted in funding for addiction recovery programs, to expand their services.