Washington candidates for US Senate talk abortion and inflation 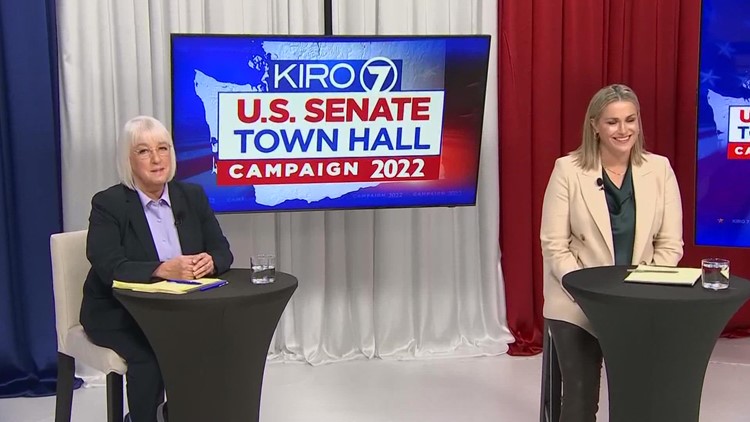 Smiley is touring Washington in the final days before the Nov. 8 election in hopes of making up the difference. One of her latest stops was in the Columbia River Gorge town of Stevenson, Wash.

Supporters of Smiley who gathered in Stevenson for the event expressed their displeasure with the nearly 30-year tenure of Sen. Murray.

“She no longer speaks for us, or even for Washingtonians,” said Helen Paulus, a Smiley voter. “And that’s why people are standing out here in the rain.”

KGW’s sister station KING 5 in Seattle conducted a poll and found that abortion and inflation were the two most important issues for those voting in Washington. Smiley is anti-abortion but says she is against a nationwide ban and believes it should be left up to voters to decide.

“What I will do is ensure that women, especially at a time of crisis, have every resource that they need,” said Smiley. “That they know, should they choose to keep their child, that it’s not a ticket to poverty, it’s not a ticket to lack of education or their shot at the American dream, that’s what I’m fighting for.”

During a debate with Smiley Sunday night, Murray said that women’s rights are at stake.

“We had protections under the Supreme Court and those protections assured women in every state in this country that your right to make your own health care decision is your right, not a politician’s,” said Murray. “That was thrown out when Mitch McConnell jammed the court with people who said ‘I’m pro-life, don’t worry about it.’ And look where we are. So now it is imperative that we take action at the national level to restore the protections of Roe.”

As for inflation, Smiley says she would like to permanently extend tax cuts for the middle class.

Senator Murray also backed the Inflation Reduction Act that supposed to lower some costs for families.

“That will specifically lower costs for people’s prescription drugs and make sure that they can afford healthcare,” said Murray.

If Murray wins, this will be her sixth term serving in the U.S. Senate.