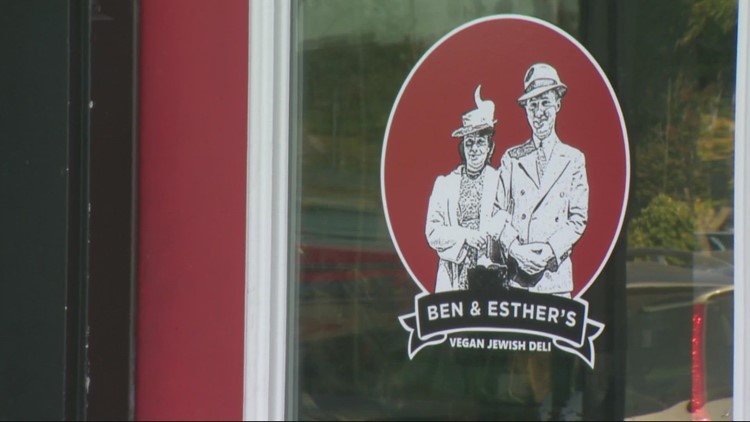 The owner of Ben and Esther’s Vegan Jewish Deli said it’s just the most recent incident targeting the Jewish-owned business.

PORTLAND, Ore. — Vandals spray-painted a swastika on the sign of a Ben and Esther’s Vegan Jewish Deli in Northeast Portland.

Employees found the hate symbol painted on the door of the business Saturday morning.

“One of my employees came in the morning and noticed that there was a swastika either spray-painted or drawn on with a marker on our front door logo,” said owner Justin King.

He said the swastika was spray-painted on a picture of his grandparents.

“It’s more than just a corporate logo,” said King. “For me, that picture of my grandparents represents the millions of Jews who either died in or fled the holocaust.”

King said this is just the latest in a string of recent incidents. A couple of week ago, the locks at the shop were superglued and staff had to replace all of them.

The location on Northeast Sandy Boulevard was also targeted a few months ago.

“Someone called and asked if we were Jewish or owned by a Jew and that they were [going to] come and do some violence,” said King.

The shop closed for the day after that call, and a couple of weeks later, someone smashed in the windows.

“I’m not scared or feel threatened. This makes me want to show up more,” said Kind.

He said the community has shown up to support him, his employees and the business.

“And spoken out against it,” King said about the recent incidents. “I think that’s the only way we can combat any kind of hate speech or anti-Semitism, racism, sexism or anything. It’s by all of us joining in and speaking out.”

King filed a police report for all of the incidents except the threatening phone call. There have been no leads.

The Anti-Defamation League tracked a 34% increase in incidents anti-Semitic incidents from 2020- to 2021.