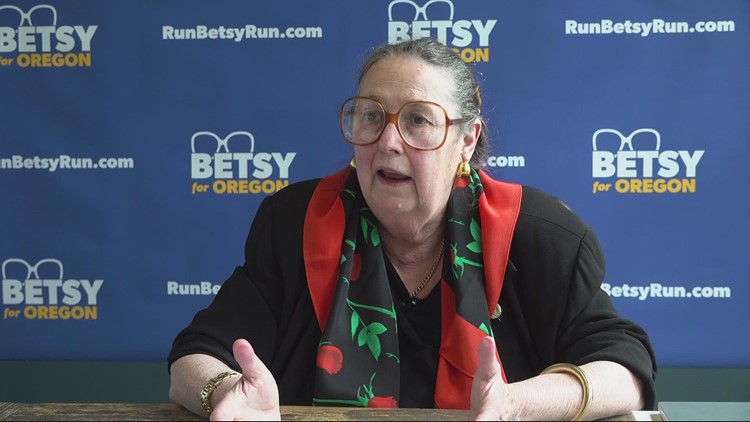 KGW is sitting down with each gubernatorial candidate head of the November election to hear their stance on the homelessness and housing crisis.

OREGON, USA — With just over a month left until the election, recent polls of the Oregon governor’s race show Republican Christine Drazan in the lead and Democrat Tina Kotek not far behind, followed by unaffiliated candidate Betsy Johnson.

KGW is sitting down with each gubernatorial candidate to hear their stance on the homelessness and housing crisis, which polls also show is a top issue for Oregon voters heading into November. We started with Drazan on Monday, and now continue with Johnson. KGW will speak with Kotek next week.

Here is the interview between KGW reporter Blair Best and Betsy Johnson, lightly edited for length and clarity. A couple of Johnson’s answers have been summarized or appended with additional context, and those sections are noted in italics. The full interview can also be viewed at the bottom.

RELATED: Drazan on homelessness: Republican candidate for governor weighs in on housing crisis

Best: How would you describe the state of Oregon streets right now?

Johnson: It’s a mess. You can’t go anywhere in Portland and not see the effects of urban decay here, and it’s tragic.

Best: In one of your recent campaign ads, it shows you driving down the street passing tents on the sidewalk and you say something along the lines of “no more tent cities.” How do you plan to do that?

Johnson: Well, there are a variety of different methodologies. First of all, let me say that I think Portland has enabled tent cities and I sure as hell know that Tina Kotek has enabled tent cities with the legislation that she has championed and pushed through the system, so we need to get the tents off the streets. There are a variety of different methodologies being tested right now… and then there are laws about camping in public spaces. Enforce the law, and that’s a city of Portland problem and a city of Portland prerogative, and I think they ought to be much more aggressive about it.

Best: What will you do at the state level to make a difference here on the streets in Portland?

Johnson: Well, it’s not what will I do, (it’s) what am I doing, unlike Tina and Christine. Tina wants to build $400,000-a-door apartments and give people homeless people a place to live. Christine wants to declare another emergency. Portland has declared homeless emergencies over and over again, it’s like declaring a hopeless emergency because all you need to do is look out the window and know we’ve got an emergency, so I have never subscribed to having meetings or drawing up five years plans. I’ve actually been doing it. I was part of a group of people who helped repurpose the abandoned Wapato jail, built at huge public expense.

That former jail is now the Bybee Lakes Hope Center, which is a trauma-informed shelter and transitional housing for the homeless. It also helps homeless people struggling with addiction.

Best: Will you allow camping on the sidewalks?

Best: What will you do to stop that? There’s so many tents out there.

The city of Portland tried doing just that at some of the expo center parking lots, but it ran into resistance, and it’s still just an idea. Johnson also said she will also work to repeal Measure 110, which voters approved in 2020 decriminalizing personal possession of illegal drugs.

Johnson: Drugs are at the root of every urban ill as I see it. They’re exacerbating mental illness and certainly the open market drug trafficking that’s going on in town.

Best: We have a lack of addiction treatment facilities. What will you do to address that and to expand those services?

Johnson: Well, a variety of things, not the least of which is let’s recognize that those facilities need to be spread all over the state. When many people came out of institutional living situations, it was with the promise that they could seek treatment in their own communities. The legislature never came through with that. And so, I think we have to recognize that there is a statewide interest in making sure the services are dispersed.

Best: You say Oregon needs to build 580,000 new housing units over the next two decades to close the housing supply deficit. How do you plan to do that?

Johnson: Well one of the things is to reduce the regulatory burden. Affordable housing is not $400,000-a-door, and with all of the regulations and the impediments and the paucity of developable land, we are driving the cost per unit through the ceiling… We’ve got to get realistic about the fact that we have an affordability crisis because we have a supply crisis.

Best: These affordable housing units oftentimes take a lot of time to develop and build. Do you have plans to address that?

Johnson: Absolutely, absolutely. First of all, time and money don’t seem to matter to state agencies. We’ve got to have permitting that is predictable, timely… I think we need to recognize that many of these big, complicated housing projects like multi-family, multiple units are relying on a mosaic of money, and the financiers have to believe that there is a pathway to get permitted or they’re going to walk away from these deals.

Best: If homelessness is someone’s number one concern going into this election, why should they vote for you?

Johnson: Well, because I’ve got a track record. Drive out to Helping Hands and see what’s happening out there. If it appears that I take enormous pride in that, it’s because I do. We’re doing it, we’re not talking about it, we’re not waiting until housing units are built, we are taking people off the streets and putting them in a setting where they can achieve and maintain their own sobriety with the dignity of work and the investment in their own futures.