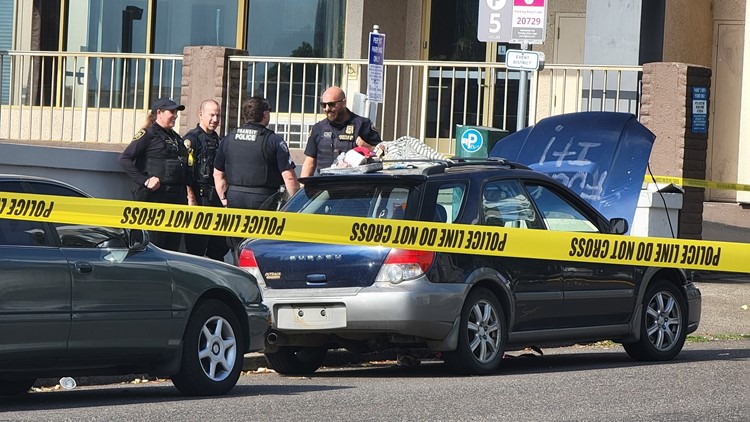 In an update on the Northeast Grand Avenue shooting Thursday, the sheriff’s office said that a woman and a man were both treated at the hospital.

PORTLAND, Ore. — The Multnomah County Sheriff’s Office released more details on Thursday about a shooting the day prior that involved one of the agency’s deputies and spanned three separate crime scenes along Northeast Grand Avenue in Portland.

According to a sheriff’s office statement, a deputy assigned to the Transit Police Division approached a man shortly before 1:30 p.m. south of the intersection at Northeast Grand and Northeast Holladay. The man was “associated with” a nearby car, the agency said.

The deputy’s interaction with the man escalated into a fight and another person, a woman, got involved — “at which time a shooting occurred involving the deputy.”

It’s unclear from the sheriff’s office statement who fired a weapon. A Portland police officer previously told KGW that the deputy had fired at someone, while a witness described seeing a suspect firing at some point during the incident.

The man and woman fled in a vehicle northbound on Northeast Grand, the sheriff’s office said, with no law enforcement officers in pursuit. Shortly after, however, the suspects caused a crash with two other drivers near Northeast Grand and Northeast Weidler Street.

Responding officers treated the woman at the scene for gunshot injuries, the sheriff’s office said, and paramedics later took her to the hospital. The male suspect was arrested on Northeast Halsey Street and taken to the hospital for injuries related to the crash. Both are expected to survive.

The other people involved in the crash at Grand and Weidler were not seriously hurt, the agency said.

The deputy who first confronted the two suspects was not injured during the incident and was placed on critical incident leave, which is standard for shootings involving law enforcement officers.

“The suspects’ reckless actions put many people in harm’s way,” said Sheriff Mike Reese. “I’m grateful that our deputy wasn’t injured in this dangerous incident, and that the community members struck by the suspects’ vehicle will be okay.”

Portland police officers, MCSO deputies and officers from other agencies flocked to the area, covering all three of the crime scenes: the place where the shooting happened, the scene of the crash and the spot where the male suspect was arrested.

The Portland Police Bureau remains the lead investigative agency for the shooting, partnering with MCSO and the Multnomah County District Attorney’s Office.