'Trying to prevent these problems from happening again and again' | City, police and owner attempt to address problem property in St. Johns 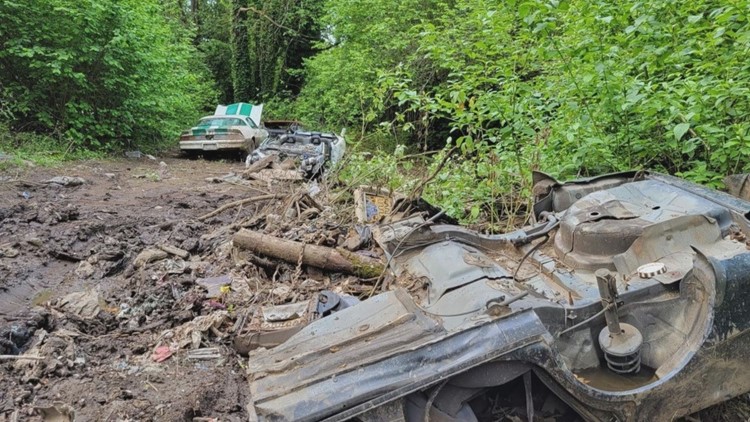 There may finally be some relief for nearby neighbors who’ve dealt with a notorious camp on N. Midway Avenue – deemed to be an illegal chop shop filled with drugs.

PORTLAND, Ore. — For the last couple of years, neighbors in St. Johns have voiced their frustrations and fears when it comes to a piece of private property at the end of N. Midway Avenue. They explained, what started off as a homeless camp – out of sight, and out of mind – became a hotbed for illegal activity.

“Lots of yelling, and screaming, and random shots fired,” said one neighbor, who wanted to remain anonymous for fear of retaliation, “All night long, there’s cars coming in and out that don’t have exhaust on them anymore. They’re cutting out catalytic converters. It’s a constant flow.”

Looking to stem that flow, those living nearby turned to police, to the city, and to the property owner for help.

KGW first learned about the property after a closer look at the growing stolen car problem in Portland. Several stolen vehicles – including a classic, and unique Timbers-themed Camaro – turned up on the lot. Many of the cars were in pieces, or allegedly stripped for parts.

All parties involved with the clean-up and enforcement on the property told KGW they’ve been working for a long time – years in some cases – to tackle the issues.

After reaching out to the property owner, he explained they cleared a camp in this location back in 2018, which cost some $20,000 to completely clean up. He said activity died down, but not for long.

The City of Portland Bureau of Development Services reported new complaints began rolling in in early 2021, about trash and illegal camping on the property.

“I believe that property has been cleaned up once, but the problems have reemerged,” said Ken Ray, a public information officer for the Bureau, “And so it’s trying to prevent these problems from happening again and again and again that has been an issue.”

Ray said, in cases like this, it is up to the owner to handle the problems and secure the property. Although the city found code violations at the site, they’re not issuing fines.

Portland Police told KGW, officers have been collaborating with the property owner and are working to address criminal issues, like trespassing and stolen cars.

Earlier this month, the owner said he installed $8,000-worth of new barriers to prevent cars from coming in and out. A friend of the owner showed us the property Thursday. We saw a junkyard – still full of stripped vehicles and other rubble – but with one noticeable difference: no people.

Neighbors said it’s been mostly clear for about a week, with a few people coming back to retrieve personal items.

Even though the site is empty now, some fear it’s only a matter of time before the trouble returns with no way to stop it.