Timeline: Atmospheric river will bring heavy rain and wind to the Northwest 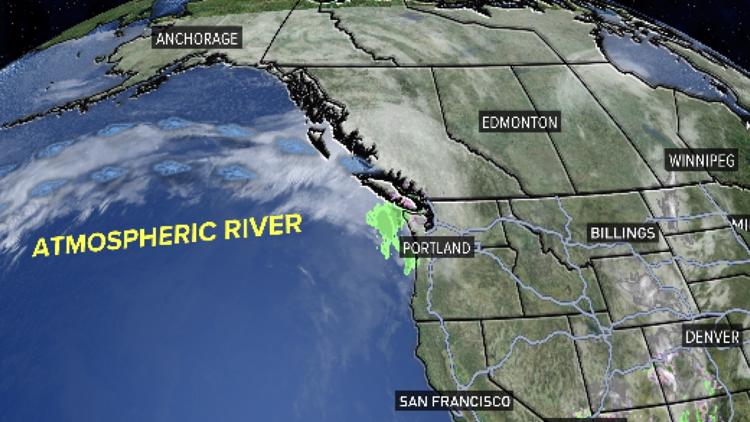 Portland and Salem could see two to three inches of total rainfall, with the Oregon coast nearing four inches and four to six inches in the Cascade Mountains.

PORTLAND, Ore. — A strong atmospheric river is taking aim at the Pacific Northwest, bringing steady rain on Friday, gusty winds and the potential for high water spots and minor flooding.

Atmospheric rivers are elongated plumes of precipitable moisture that channels into a location for as little as 12 hours to upwards of three days.

“These events have the potential to deliver flooding rainfall depending on the duration of the episode,” said KGW meteorologist Rod Hill.

The rain will pick up Thursday night, and a leading warm front will bring hours of steady rain during the daytime on Friday extending through the evening.

“The relatively short duration of heavy rain between Friday 4 p.m. and the midnight hour should prevent river flooding except for spotty locations,” Hill said.

RELATED: Here’s what an atmospheric river is and how they form

The heaviest rain over the Portland metro area is expected to fall Friday evening. Weather models suggest “extreme rain rates” between 5 p.m. and 10 p.m., according to Hill. Some areas could see an inch of rain in an hour, which could lead to high water on roads and minor flooding of streams Friday overnight into Saturday morning.

“The main widespread impact will likely be ponding of water of roadways and typical low spots or locations with pour drainage,” Hill said.

Portland and Salem could see two to three inches of total rainfall, with the Oregon coast nearing four inches.

Snow in the Cascades

Snow levels will rise Thursday overnight to 6,000 feet and will jump to 8,000 feet on Friday, bringing heavy rain to the Mount Hood area and the Cascade Mountains. The cascades could see four to six inches of total rainfall.

In addition to the heavy rain, people in the Willamette Valley can expect gusty southwest winds to blow. The National Weather Service (NWS) has issued a Wind Advisory for much of the Interstate 5 corridor between noon Friday and 10 p.m. Gusty winds are expected to blow between 30-40 mph.

The NWS said in a tweet that tree damage and isolated power outages are possible on Friday, and advised people to avoid recreating in the Cascades.

The high wind threat ends early Saturday morning when a cold front arrives, which will also break the rainfall into scattered showers.

OTHER STORIES: How much snow will Portland get this winter? Rod Hill winter outlook 2022-23