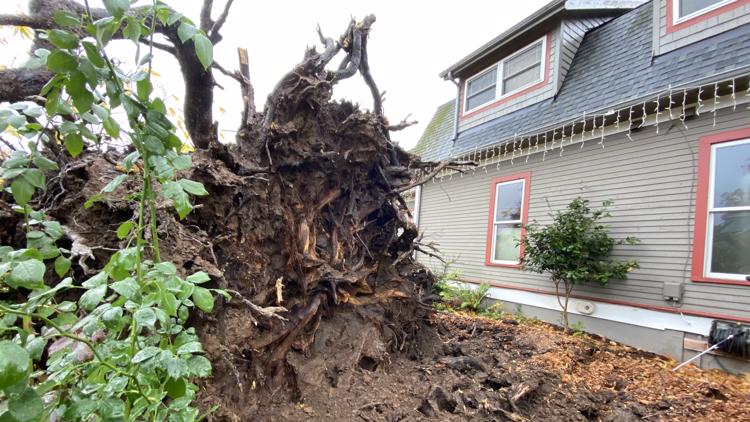 Gusty winds could reach 40-50 mph across the Portland metro — powerful enough to knock down trees and powerlines.

PORTLAND, Ore. — Widespread power outages are impacting nearly 9,000 people across the Portland metro area Friday as heavy rain and gusty winds from a strong atmospheric river bears down on the Pacific Northwest.

The National Weather Service has issued a Wind Advisory for much of the Interstate 5 corridor through 1 a.m. on Saturday. Gusty winds could reach 40-50 mph — powerful enough to knock down trees and powerlines.

At one point, more than 8,900 Portland General Electric customers were without power Friday morning, according to the utility company’s power outage map. The outages appear to be mostly spread throughout the Portland metro area. PGE noted they’re investigating the cause of the outages.

Pacific Power reported over 100 customers without electricity Friday morning, with most of those impacted customers located near Oregon’s north coast and the Salem area.

RELATED: Timeline: Atmospheric river will bring heavy rain and wind to the Northwest

There have been reports of multiple downed trees around the Portland metro, including a large tree that feel down in a person’s yard near Southeast Lexington Street and Southeast 11th Avenue. The tree also toppled a powerline, causing electricity to be knocked out in the area.

Traffic was disrupted on Highway 26 after a tree fell and blocked two lanes of the highway near the Sylvan exit.

A tree fell on a powerline near Northwest Germantown Road and Northwest Harbor Boulevard. Nearby resident Kevin O’Connell said his power had been out for a few hours Friday morning.

“A lot of power failures,” O’Connell said. “Germantown has overgrown trees on both sides of the road, they just fall into the lines over and over.”

By Friday afternoon the tree was cleared, but pieces could still be seen lying in the road. O’Connell said he was prepared for the worst.

“Just got all the flashlights and batteries ready, firewood for the fireplace and was generally prepared,” he said.

Click here for TripCheck’s map for the latest road closures

This is a developing story and it will be updated.