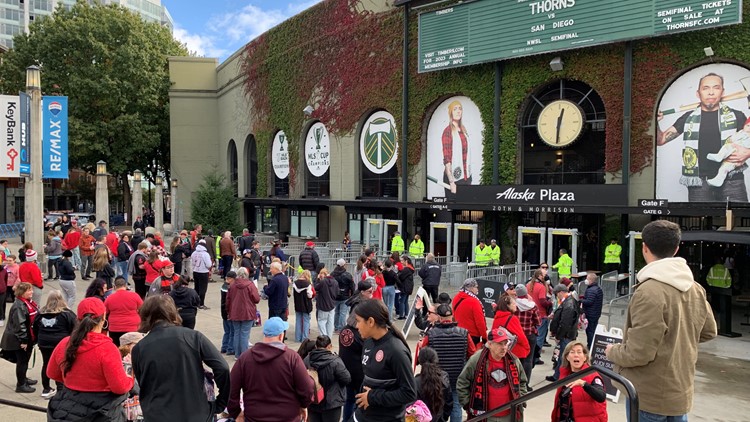 This was the team’s first game since an investigation uncovered a toxic culture of abuse within the organization.

PORTLAND, Ore. — Thorns fans lined the street outside Providence Park to show love to the players as they arrived for the big semi-final match against San Diego.

The enthusiasm carried over to game time. The atmosphere inside the stadium was electric with a trip to the National Women’s Soccer League championship on the line.

“It’s important for me to be here for the players,” Kristen McDonell said. “That’s what the players say they wanted. I’ve been a season ticket holder since the first season. I’ve been through the ups and downs with this club.”

The downs she is referring to is why there was no telling how many fans would show up Sunday, but in the end, they showed up for their Thorns in a big way.

“They need our support,” Steven Steinberg said. “They need each other. They need to know they’re loved and valued.”

Perhaps that has never been more important than it is right now, less than two weeks since Merritt Paulson removed himself as CEO of the Thorns and Timbers. The shake-up at the top of both soccer clubs came after an international law firm released the findings of a months-long investigation into allegations of abuse in NWSL. The investigation revealed a toxic culture of sexual, emotional and verbal abuse across the league as well as within the Thorns organization. Former coach Paul Riley was to blame for a lot of that, but the investigation also showed patterns of misconduct by Merritt Paulson. In addition to front office staffers Gavin Wilkinson and Mike Golub who have since been dismissed.

“We as the fans think as a whole are asking for change in ownership if that’s something we can put pressure on them to do,” McDonell said. “But the players said hey we want you guys here to support us. That’s what we’re here to do. We’re certainly not here to support ownership.”

That much was clear with all of the for-sale signs in the stands. Whether Pauslon eventually caves to that public pressure remains to be seen. What is clear is that Sunday was all about supporting the players on the pitch. It paid off with Crystal Dunn putting one in the back of the net with mere minutes left in regulation.

“We support these players,” Greenough said. “They’ve been incredible through a lot of stress and turmoil.”