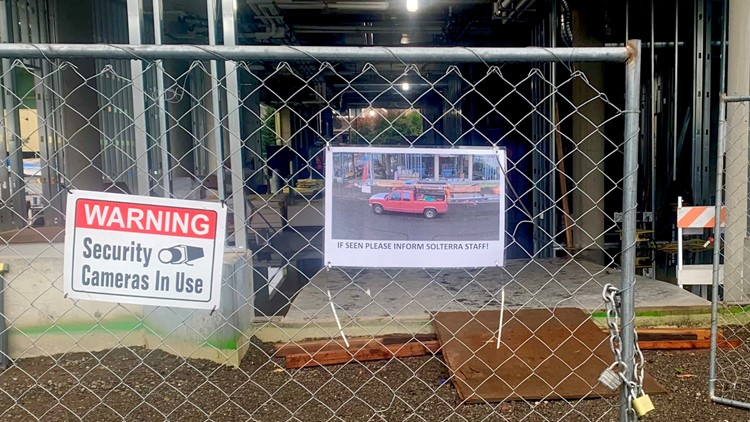 The developer is offering a $2,500 reward for information on the people responsible.

PORTLAND, Ore. — Thieves stole $100,000 worth of tools and equipment from a construction site in Northeast Portland on Saturday. Solterra, the developer, is offering a $2,500 reward for information on the people responsible.

Surveillance footage captured a red pickup truck with a white hood stop at the entrance of the site on Northeast 12th Avenue and Alberta Street on Saturday afternoon.

Caleb Konigsfeld with Solterra said the suspects cut the chain at the job site entrance, then closed it so as not to raise suspicion before leaving the area.

Several hours later, at around 6 p.m., that same pickup truck returned. Two suspects were seen entering the construction site — triggering an alarm to police and the owner, Konigsfeld said

“When they noticed the owner coming on-site they booked it off — you can see them running away,” said Konigsfeld.

There was only some damage to a tool box reported before police cleared the scene. But that wasn’t the end of it, a couple of hours later the thieves came back once again.

This time the thieves stole a bunch of tools and equipment. Konigsfeld and his crew estimate the thieves got away with up to $100,000 worth of equipment from the contractors working at the site, like Jason Nusser.

“I’ve got eight guys coming to work and all of our tools were taken, every last tool,” said Nusser. “So it’s kind of frustrating when you’re coming in to do work, I guess provide a livelihood for your family and you can’t work.”

All they want to do now is spread awareness and catch the thieves.

“It’s personal and these guys are still out there, it seems like they’re hitting more jobs sites,” said Konigsfeld. “We just don’t want it to happen anymore, we want some type of justice to be done if we can find them that’d be great.”