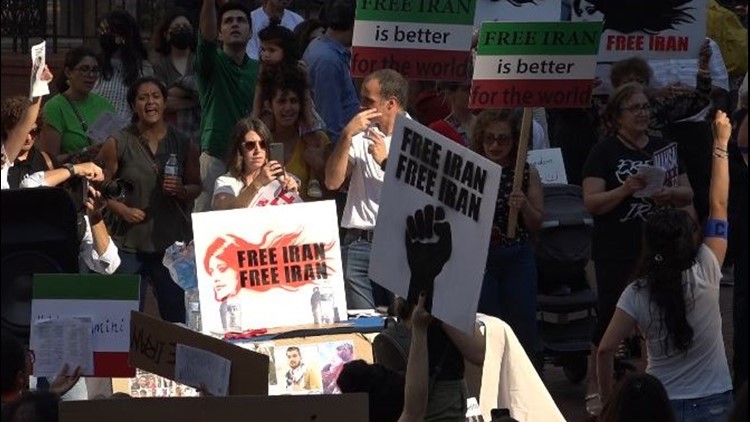 PORTLAND, Ore. — Calls for freedom rang out across downtown Portland this weekend in the latest rallies for Iranian women’s rights. The protests in Pioneer Square are part of global rallies against the Iranian government, which have been going on for several weeks.

The outcry comes as young women are being killed by Iranian police for allegedly violating religious dress code and showing too much hair. This has sparked Iranians across the world to speak up and share their stories.

Among those protesting in Portland Saturday is Soodabeh Mokry who has her own story of struggle while growing up in Iran.

“When I turned 18, it was the time of the beginning of the revolution,” said Mokry.

She was in nursing school in Iran at the time.

The closures sparked protests across Iran, and Soodabeh at 19 years old took part. One day after midterms, she said she and her fellow nursing students were sitting outside the school when the Iranian police attacked them.

“They came with bats, with knives, with guns and they attacked us, and I was hit in my head so much that I was very dizzy. And they took us, all of us, and they shoved us like animals in the back of a truck and took us to a big stadium that was their jail.”

She was separated from her family with no way to contact them.

“I was thinking about my family and before I knew, I just fell down and I didn’t remember from there. According to my family, I was in a coma for about a week, and they had to search all the hospitals to figure out if I was alive or not and I get goosebumps even right now talking about it,” she said.

Mokry escaped but said that type of violence is only getting worse. Last month, two young women died in Iranian police custody for allegedly violating religious dress code by showing too much hair. Since Sept. 11, people have been killed in Iran for protesting these rules, according to the most recent tally by the Associated Press.

RELATED: No, a viral video doesn’t show an Iranian father dancing at his daughter’s funeral

“I know what Iranian people are feeling right now because I was one of the lucky ones that survived,” Mokry said while fighting back tears. “That could have been me! That was me! I just had the opportunity to be alive and speak right now, and that’s why we are here. Because every girl, every woman, every man that is saying enough is enough, stop killing us — they are being prosecuted and they are being killed in Iran right now.”

Soodabeh came to Portland in 1990. She learned English, raised two young children, finished nursing school and eventually wrote two books reflecting on her journey and struggles. Decades later, she’s now safe, but the rules of Iranian government have stayed the same for the past 40 years.

“And it needs to stop,” Mokry said.

Amid the recent worldwide protests, the Iranian government is cracking down even more by cutting off internet access, tapping phone lines and tightening social media restrictions, which makes is nearly impossible for people like Mokry to contact family. She, like many others, are concerned.

“Nobody is safe in Iran, and we are all hoping for some help, some divine intervention to help Iran so they can get the freedom back,” she said.