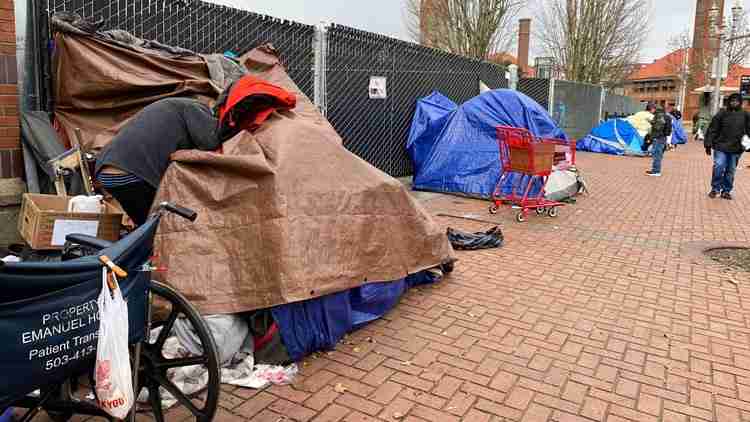 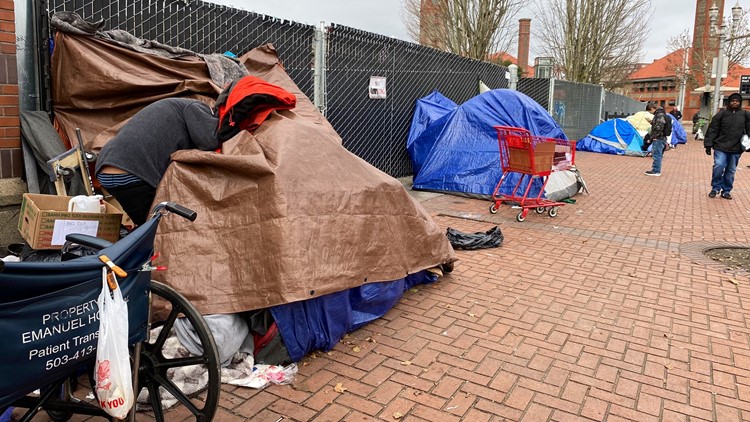 Portlanders with mobility disabilities are suing the city, claiming many of the homeless tents are blocking ADA access on the sidewalks.

PORTLAND, Ore. — A long line of tents covered the sidewalk on Northwest Davis Street in Portland’s Old Town. One homeless man who just moved to Portland from Arkansas was there setting up a bright orange tent Wednesday morning. He was getting help from the homeless man who lives under a brown tarp right next to him.

“These are survival tools, that’s all,” Johnny Ray explained while helping the man from Arkansas set up his site. He said tents and tarps help them stay alive. However, it’s those same survival tools that made the city subject to a lawsuit back in September.

Ten Portlanders with mobility disabilities filed a suit against the City of Portland, arguing that homeless tents block ADA access on city sidewalks. The attorneys representing those plaintiffs have since uncovered just how many tents and tarps the county has supplied homeless people over the past two years.

According to 2021 county budget documents, the Joint Office of Homeless Services gave out 6,550 tents and 27,000 tarps. The joint office told KGW that they haven’t yet assembled the amount they gave out this past year. However, through recent subpoenas, the attorneys representing the Portlanders with disabilities obtained hundreds of documents that show from March 2020 to September 2022 the county used at least $2 million taxpayer dollars to purchase 22,700 tents and 69,514 tarps.

At the start of the COVID-19 pandemic, JOHS gave out tents to nonprofits and people living on the streets to keep them safe as shelters closed amid COVID concerns. They also did this during severe weather events. Now, two years later, they continue to hand them out. Many of them end up blocking city sidewalks, making it nearly impossible for people with mobility disabilities to get around.

“What the county did was put tents on the sidewalks, which is the very reason that my plaintiffs are suing the city,” said John DiLorenzo, the attorney representing the plaintiffs in this case. “I know of many instances in which people with disabilities were telling nonprofit groups, ‘Please don’t block the sidewalks,’ and the nonprofit groups were just doing it anyway.”

This homeless man has been on the streets for ten years and has had about 40 tents and 50 tarps. He says they’re a crucial survival tool. @KGWNews pic.twitter.com/Y0FntoyQk7

The numbers break down to roughly four tents and 13 tarps per homeless person over the past two years — but the actual number depends on the person and where they tend to camp.

“I’ve had a few over the years,” added Toby who lives in a tent on the other side of the block from Johnny Ray.

Toby has had a new tent every year for the past 12 years. He gets them from friends or shelters.

“If you never had a tent out here, do you think you’d be out here this long?” KGW reporter Blair Best asked Toby.

“Probably not,” Toby replied. “Might have gotten tired of it a lot faster, you know, if I didn’t have any shelter.”

Many of the supplies provided by the county, end up being cleared by the city during routine camp removals. That leads the homeless campers to go back for more tents and tarps.

“The tents were either swept up or they disintegrated, or they were just thrown by the wayside and people just kept supplying them with more tents,” said DiLorenzo.

The Joint Office says they used federal COVID relief money to supply many of the tents and tarps back in 2020. That money is running out and they are cutting back the supplies they give out.

A settlement in the ADA case is scheduled for a hearing January 27, 2023 in federal court.