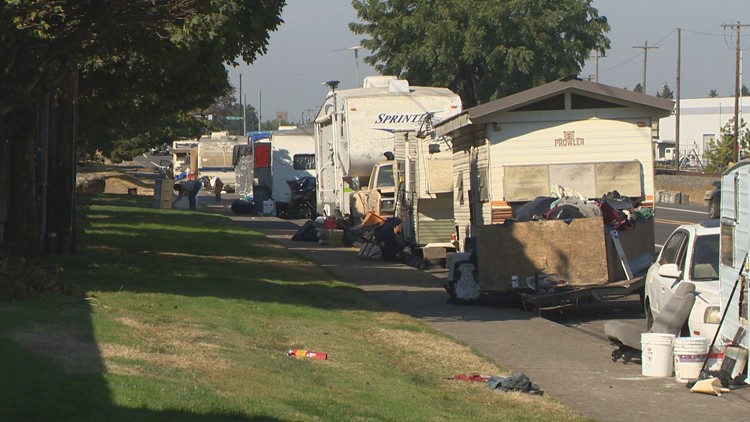 While at the homeless camp in Northeast Portland a homeless couple broke into a KGW news car, stealing equipment and personal bags.

PORTLAND, Ore. — A line of RVs and campers has formed outside a retirement community on Northeast Sandy Boulevard and 143rd. It moved in a few weeks ago after the city cleared them from the Parkrose High and Middle Schools.

“It’s pure hell,” said Bambi Alvey, who has lived in the retirement community for 10 years. “I wake up every morning looking out my window at the homeless people looking through my window back at me.”

Neighbors like Alvey said homeless people steal from them, break into their garages and run generators at night, which keeps them up.

“Every morning I go out, I look at my window to see what they have stolen out of my yard,” added Yvonne McKown who has been living there for eight years.

“You can’t sleep,” explained Jerome Hulett. “You get woken up every night. It’s not why we pay taxes.”

One neighbor said one of the campers threatened to burn their homes down if they called the police.

“I’m about at my breaking point. I’ve had enough of it, and I’ve been thinking about moving,” said McKown. “I just don’t feel they have a right to come into anybody’s neighborhood, no matter where it is, and make a mess of it.”

Even when neighbors do call police, they don’t hear back. The Portland Police North Precinct Neighborhood Response Team said they’ve never responded in-person to issues at this camp.

Another resident Daniel Blacker, who raised his family in this neighborhood, added, “It feels like you’re being avoided and ignored.”

KGW also talked with those living in the camp, like Kamis Wright who said she’s in between jobs and trying to get back on her feet.

“I’ve been in this location two different times. This last time— since the end of June,” said Wright. She knows the neighbors are upset she’s there. “I tell them I try to find a new place all the time, I just don’t have anybody to move my trailer at the moment and I try to keep my spot clean.”

Even though she’s part of the camp, she too feels unsafe.

“There are people out here that look threatening, like they could harm you or you do get threatened,” said Wright.

As a KGW crew talked with those living in the camp, a homeless couple broke into their news car and stole all their electronics and personal belongings. After about 30 minutes the police showed up, at which point the things were long gone.

Today while on assignment at a homeless camp in NE Portland on Sandy Blvd our news car was broken into. Most of our gear and all our personal bags were stolen. pic.twitter.com/1Ccm3OYBHD

“At some point your compassion just runs out. You don’t have any anymore,” said Hulett.

The city said this camp is on their radar and they plan to clear it soon.