The Portlandia statue arrived in downtown Portland 37 years ago 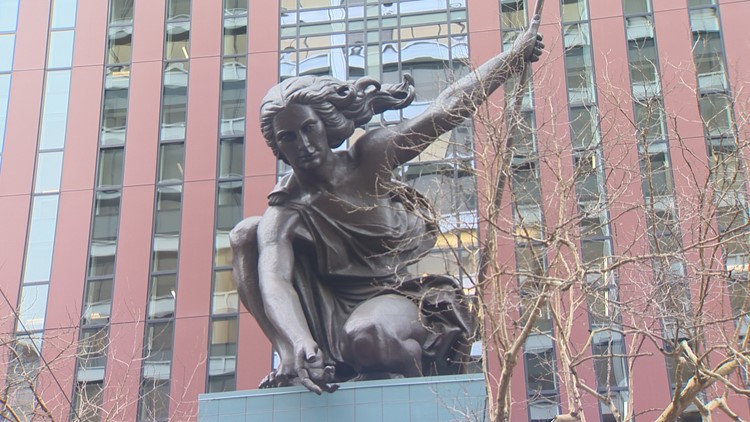 Artist Ray Kaskey was chosen through a national competition to build a statue that would complement the newly built Portland Building.

PORTLAND, Ore. — Sitting three stories high on the Portland Building along Southwest 5th Avenue in downtown Portland is the well-known, but non-commercialized statue known as the Portlandia statue.

It’s a piece of art so big that it had to be shipped coast to coast in pieces when it was constructed.

Oct. 6 marked 37 years since it made its way down the Willamette River on a barge before it was installed, ending a nearly three-year mission to design it, construct it and ship it.

Maryland artist Ray Kaskey won a national competition the city held to build a new statue to be part of the Portland Building.

The statue depicts a woman in a crouched position with her hand outstretched and her eyes gazing at the walkers below.

“The hand was meant to engage the eye of the spectator of the street like she’s looking at you,” Kaskey said.

Kaskey’s inspiration for the piece was taken from a piece of 18th century art called “Ancient of Days.” Piece those two concepts together, and Kaskey came up with the Portlandia statue, which has become an iconic location in downtown Portland.

“It’s very satisfying,” Kaskey said, when asked what it means to him to know how loved the statue is.

Just two years and 10 months prior to its installation, Kaskey got to work building the massive piece.

“I suppose if she were standing, it would be about a 50-foot figure,” said Kaskey.

The Portlandia statue weighs 6-and-a-half tons and stands more than 30-feet tall. It was built in sections inside a Maryland warehouse with only 20-foot ceilings.

Kaskey’s original design had a wreath hanging from the woman’s hand, but the idea was cut from the final product because Kaskey said he was told it looked like the wreath at the Tomb of the Unknown Soldier.

The Portlandia statue’s original design also called for a rose to hold together the drapery on the woman’s shoulder, but Kaskey said he ran out of time to add that detail.

The Statue of Liberty is the largest hammered copper statue in the United States, while the Portlandia statue is the second largest.

Hammered copper was a cheaper alternative technique that Kaskey said he learned in a weekend.

“Well, it was a learning curve,” Kaskey said.

Inside the statue is a set of steel structures that hold it all together, but when he was asked by engineers how long he wanted it to last, Kaskey said 25 years sounded good.

Through public funding, Kaskey was paid $198,000 for his work, but his contract was later amended to $228,000. At the time, he thought that would be enough for his time, materials and transportation across the country.

“It was more incredible how fast it disappeared,” he said.

Kaskey tried to ask the city for more money, but thanks to donations and fundraising efforts, he was able to secure enough money to get the piece completed and shipped by rail for free from Maryland to Portland where it was put together for the first time.

Dozens of boats accompanied a barge carrying the massive statue to the Portland waterfront where a large crowd waited for its arrival and installation at the Portland Building.

WATCH: What’s in a Name? playlist