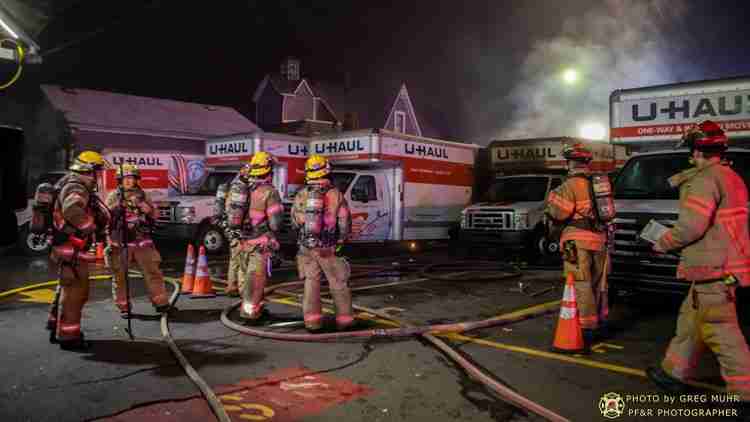 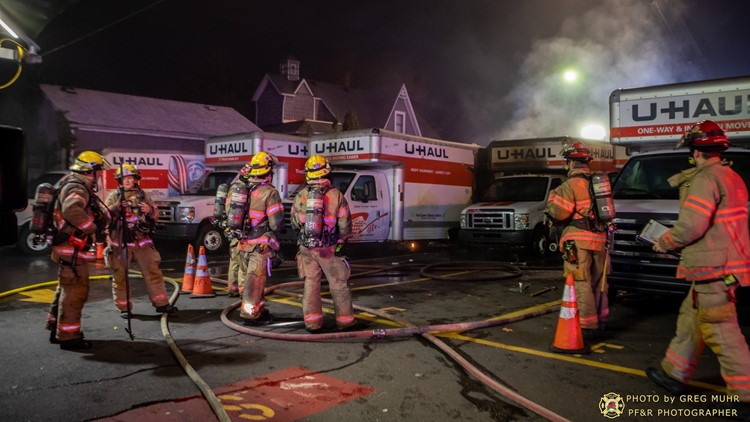 Portland Fire & Rescue said that someone was trying to siphon fuel from U-Haul trucks when the fire broke out. There are no known injuries.

PORTLAND, Ore. — An attempt to steal gas from rental trucks at a Southeast Portland U-Haul location resulted in a “large fire” early Thanksgiving morning, according to Portland Fire & Rescue.

Firefighters were called out to the U-Haul location at the corner of SE 48th Avenue and SE Powell Boulevard just after 1:45 a.m. on Thursday. The first engine to arrive at the scene reported seeing three or four trucks in the center of the lot wreathed in flames.

Crews began bringing in hoses to knock down the fire and prevent it from spreading to nearby trucks and buildings.

As the firefight went on, PF&R officials realized that the parking lot was packed too tight with box trucks for crews to effectively reach the source of the fire.

“The physical spaces between the trucks were so small a firefighter with their air bottle on would not be able to walk between the trucks to get to the fire burning in the middle of the lot,” the agency said in a statement. “The parking lot was filled with various sizes of rental trucks parked 14” apart with the tailboard of one truck nearly touching the front bumper of the truck behind to help paint a picture of how tight spaces were making moving bodies and hoses quite difficult.”

The fire chief who next arrived on-scene called for a second alarm, bringing in more firefighters. Meanwhile crews continued to bring in multiple hose lines to get water on the fire, PF&R said, as well as preparing for an aerial attack.

Just as a ladder truck got into place in order to douse the fire from above, crews on the ground reported that they’d been able to get the fire under control and mostly extinguished. There were no reported injuries from the fire.

According to a PF&R official, an investigation into the fire determined that someone had been trying to siphon fuel from the rental trucks before the fire began. However, investigators weren’t able to find out what method of siphoning was used due to fire damage on the trucks.