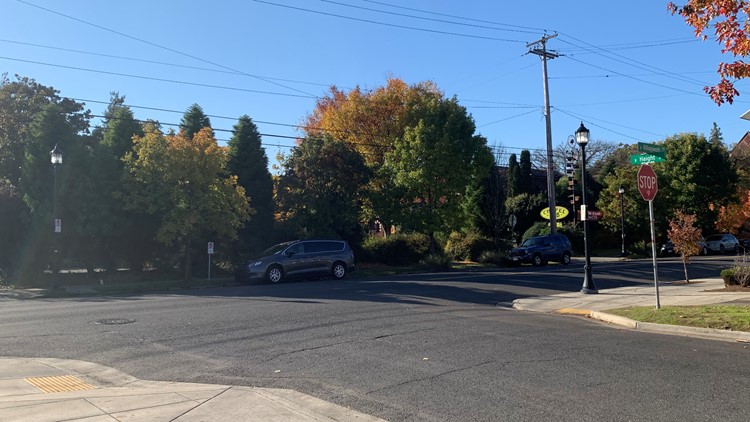 This is the second student to be injured by gunfire near the school in a matter of weeks.

PORTLAND, Ore. — A bullet strike to the east side of The Skanner News building in North Portland is the only evidence of a shooting near the corner of North Killingsworth and Haight.

“It is concerning, obviously, especially in a building full of windows up front,” John Gallucci said.

Gallucci rents office space in The Skanner News building. He says he heard the gunfire between 3:30 p.m. and 4:00 p.m. on Monday.

“Almost like a test fire,” Gallucci said. “Okay this works and then it seemed like four or five more shots afterwards in pretty quick succession.”

All of it played out just blocks from Jefferson High School. In fact, detectives say two 17-year-old students had just driven away from the school when somebody in another car pulled up and fired at them. Only one teen was hit in the shoulder.

“It’s scary because it’s a life-changing event should you get hit by a bullet,” Gallucci said.

The shooting of a high school student not far from their school would be deeply troubling if it was an isolated event, but sadly it is not. In mid October, another Jefferson High student was injured in a shooting near North Commercial and Alberta.

“These types of situations strike home for me,” Freddie Mack said. “I’m a father of a son and his safety is totally my foremost concern and I share that concern with families of our PPS students.”

Mack, senior director of communications for the district, says in addition to making counselors available to students, the district is accelerating the timeline to install cameras on the east side of the school. Also, district leaders are inquiring about putting a police officer outside the building before and after school.

“We’re optimistic,” Mack said. “We’re working closely with PPB and the city to put in place some measures that we hope will curb this violence.”

There is no saying any of these measures would have prevented the violence of the last month, but it is a start for a community desperate for peace.

Both shootings near Jefferson High School are unsolved. Anyone with information about the cases is urged to contact the Portland Police Bureau.