Students across Oregon walked out of class to support Measure 114 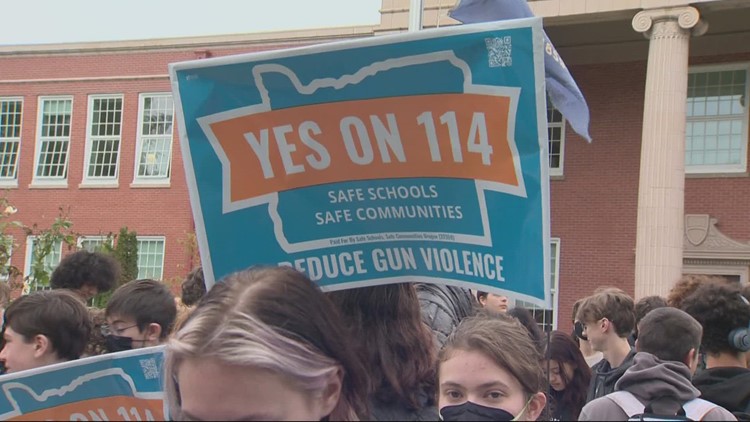 Measure 114 would increase gun control in Oregon, and if passed it would be the strictest gun control measure in the nation.

PORTLAND, Ore. — A couple hundred students at Grant High School walked out at 1:14 p.m. Tuesday in support of Oregon Measure 114 that would increase gun control in Oregon.

This comes after two students were killed at a St. Louis high school Monday morning and a week after a shooting happened outside of Jefferson High school that injured two students.

“The two recent shootings definitely have emphasize the need for a type measure like this,” said Luke Henderickson a senior at Grant High School.

“This measure is historic and it’s very important,” said Henderickson. “And it’s time we get something in our Oregon legislation that addresses gun violence head on like measure 114.”

This comes after students were shot outside of Jefferson High last week and a St. Louis school shooting that killed two yesterday.

It would require permits issued by police to buy a gun, heightened background checks, training and photo ID, alongside banning magazines that hold more than 10 rounds of ammunition.

“We recognize that we must address firearm violence, but Measure 114 is just not the answer,” said Shane Nelson, President of the Oregon State Sheriffs’ Association (OSSA).

OSSA is against the measure — saying it will put great risk of gun violence to the community as scarce public resources will be placed elsewhere to accommodate Oregon Measure 114.

“It will move very scarce law-enforcement resources from protecting our communities to doing backgrounds and issuing permits,” said Nelson in a recorded statement on the OSSA YouTube channel.

Executive Director Kevin Starrett of Oregon Firearms Federation strongly disagrees with the measure as well. He declined an interview with KGW but had this to say about Measure 114 in the 2022 Voter Pamphlet:

“Ballot Measure 114 will virtually eliminate your ability to protect yourself and your family. You may not obtain a firearm for your protection without the permission of your local police chief or sheriff… At a time when violent crime is skyrocketing and police are not responding, this measure will have a devastating effect on our poorest communities and put those in high crime areas in even greater Jeopardy.”

But students at Grant High School and others around the state are asking their communities to step up and vote “yes” on Measure 114 — as they say gun violence brings many of them anxiety to go to school and learn.

“I felt like it was really important to do this walkout to send a message like ‘hey, we too want a safe learning environment and we want freedom to walk the streets and not have to worry about guns or getting shot,” said Brady Winn who is part of the Gun Law Reform club at Grant High School.

As a friendly reminder Election Day is on Tuesday, Nov. 8.