'Spirit of Halloweentown' in St. Helens is now open. Here's what you need to know 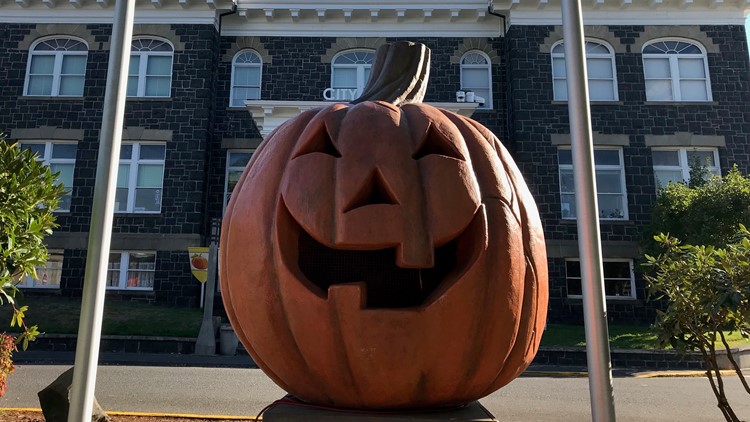 The must-see event for Halloween lovers runs through Oct. 21.

ST. HELENS, Ore. — Halloween isn’t here yet, but that doesn’t mean the celebrations haven’t started. The town of St. Helens, Oregon is getting festive and marking Halloween during the entire month of October.

Their iconic event, “Spirit of Halloweentown,” opened Sept. 17 and it runs through Oct. 31.

St. Helens was the backdrop for the classic Disney Channel movie, Halloweentown, which was filmed in 1998. Every year, part of the town is transformed into a month-long celebration of all things spooky and creepy, drawing tens of thousands of people.

RELATED: Halloweentown is real, and it’s in the Pacific Northwest

Visitors will feel like they’ve been transported onto the set of Halloweentown when they take a stroll through the town’s decked-out courthouse plaza, home to the famous big pumpkin.

Fans also have the chance to meet some of the original actors of the movie on Oct. 1 and Oct. 2. Cast members of the Twilight film series will also make special guest appearances on Oct. 29 and Oct. 30.

People can also catch a glimpse of a quirky cast of professional entertainers, including dancing witches and the king and queen of Halloween.

There are a number of special events and family-friendly attractions held on weekends, including a costume contest with cash prizes. There’s also the big Halloween parade, the Spirit of Halloweentown train, and for those who want the thrill of being spooked — the haunted house.

Tickets for general admission and special attractions are available by the entrance arch on South First Street between 10 a.m.-4 p.m.

OTHER STORIES: A guide to fall activities in the Portland metro area