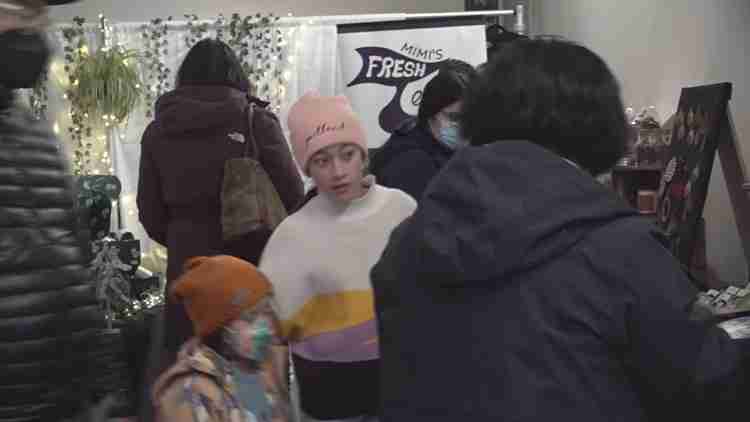 The owner of Mimi’s Fresh Tees in downtown Portland wants people to come back to downtown for their shopping.

Kamelah Adams, owner of Mimi’s Fresh Tees in downtown Portland, said she hopes people come back to downtown. She has a new temporary pop-up store on SW 10th Avenue and Morrison.

“It’s vital for people to come to downtown Portland — and if you don’t, you’re going to say ‘bye bye’ to a lot of unique small businesses,” Adams said.

Adams started Mimi’s Fresh Tees back in 2018. She makes T-shirts focused on social justice and female empowerment. She had a store in Old Town but said she had to move it because of crime in the area.

“We’re trying to spread a little love, light and hope to the downtown area because it’s been tough these past couple of years,” Adams said. “Shopping small means you’re directly supporting families who live in Portland.”

Soobien Oh was shopping around at Mimi’s Fresh Tees on Saturday. He said he makes it a priority to support small businesses.

“We want to make conscious choices about where we are spending money, and what better way to do it than spend it locally and with people we know are doing good things for our community,” Oh said.

The Japanese American Museum of Oregon on Northwest Flanders Street has a new pop-up shop with Japanese-inspired gifts and crafts.

“Most of them are made by Japanese and Japanese American artists that are here locally,” said Elissa Dingus, Director of Education Engagement.

Dee Tory is the owner of WUL in downtown Portland. It’s a gallery space with art and clothing. He’s an artist and a designer who also has a foundation that raises scholarship money for students.

“Small businesses can be niche markets that need to be supported in order to grow and become bigger and have a voice in what they’re existing for,” Tory said.