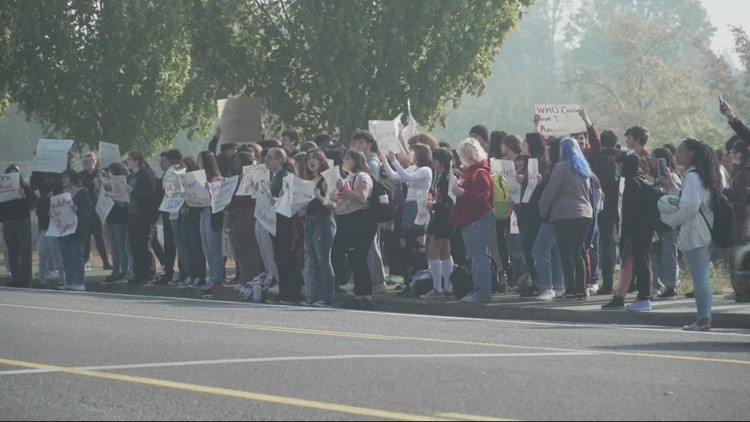 Between 75 to 100 Reynolds high school students attended this walkout on Wednesday, Oct. 19.

PORTLAND, Ore. — Between 75 to 100 Reynolds High School students walked out today just days after a shooting next to their school took place last week.

Students and parents are upset with the way the school handled the situation.

“They failed us,” said a Reynolds parent.

“I didn’t get a message from the school until an hour and a half later. So, it was ridiculous.”

Students tell KGW they were on campus and were not informed about the shooting or lack of lockdown – something they believe should have been done.

“Any sign of danger should have been immediately attended to as quickly as possible,” said Nadege Adibonou, a senior at Reynolds high school.

“Even if it’s not a sure thing that’s going on. If you even think about it, you should put in more action than our school did.”

Other students took the time to reflect on a former Reynold’s student who was shot and killed in a school shooting back in 2014.

Stating the school should take these situations more seriously.

“I mean obviously it was absolutely terrifying,” said Sophia Lu, a senior at Reynolds high school said about the recent shooting.

“Because you’re a student. You’re afraid you’re going to die. Some people died here not too long ago.”

HAPPENING NOW: There’s a walkout outside of the Reynolds HS. Students say they feel unsafe after the way the school handled a shooting situation last week.

They say the school never went on lockdown.

The Reynolds School District sent us this statement: “We fully support the students’ right to protest. We also support how the incident was handled last week. Students, teachers and staff were safe and therefore we didn’t need to go into lockdown or secure mode.”

District officials and the Multnomah County Sheriff’s office say they worked together to determine if students on campus were safe.

KGW later interviewed Reynolds School District spokesperson Steven Padilla about his response to the walkout. He says a lockdown is determined on a case-by-case basis.

“We have to be fluid with the situation, depending on what it is,” Padilla told KGW.

“We might have inadvertently locked hundreds of students outside of the school because it happened during lunch. And so, we have to take a serious look at the situation and assess and determine what is best for the safety of the students, teachers and the staff.”

Padilla says within minutes of being notified of the incident, they had over nine sheriff deputies in the school – stating there was “no need for a secure or a lockdown.”

Padilla added that he respects families’ rights to protest.

“It’s unfortunate that this incident happened at Reynolds in 2014 and that people look back at that, but this really is a different incident,” said Padilla.

“And it had to be responded to in a different manner.”

Back in 2014, Reynolds High School had a deadly school shooting that killed one of their students. Something many students at the walkout referenced during their protest outside of the school on Wednesday.

Padilla did say the school has a partnership with the Multnomah County Sheriff’s Department – they have two school resource officers on campus to provide protection to the students and the community around them.