Rewards offered in list of unsolved Portland homicides since 2020 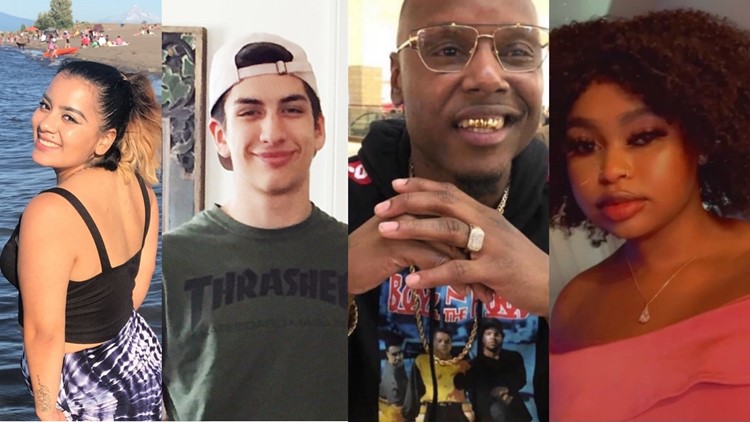 Julian Heredia, Evelin Navarro Barajas, Huarleen Bain and Adau Duop were all killed between spring of 2020 and early 2022.

PORTLAND, Ore. — Portland police and Crime Stoppers of Oregon put out a call for information Tuesday about a list of unsolved homicides that have happened in Portland since the spring of 2020.

The four cases highlighted Tuesday represent just a handful of the homicides in the city within the last several years, most of which were the result of a surge in Portland’s gun violence that first became clearly apparent in 2019. Many homicides from the last few years, not just these four, remain unsolved.

Evelin Navarro Barajas, 23, was in a parking lot near the intersection of NE Killingsworth Street and NE Cully Boulevard when she was gunned down on June 18, 2020, according to Portland police. Another victim, an adult man, was injured in the shooting but survived.

OTHER STORIES: Police seized vehicle believed to be involved in shooting near Jefferson High that injured two students

“Evelin was a beautiful soul, she had the biggest heart for the homeless community, there was never a day she didn’t try to help a homeless member,” Barajas’ sister, Janicey, told KGW last year.

Shortly after the shooting, Portland police said they suspected that it was gang-related, but they did not believe Barajas was associated with any gangs. Police have otherwise released no information about leads or potential suspects.

Earlier this year, the FBI said it would offer rewards ranging from $15,000 to $25,000 for key information in seven different unsolved homicide cases. Barajas’ case was one that the agency highlighted.

“It hurts me how somebody is out there just walking around like it’s nothing, and we want justice for her,” Barajas’ mother, Sonia, said at the time.

Julian Heredia, 19, was on SE Powell Boulevard near the intersection with SE 136th when he was shot and killed on July 10, 2020. His death was ruled a homicide, but Portland police have not released any further information about suspects or leads in the case.

On Oct. 23 of 2020, Portland firefighters responded to NE 148th Avenue near Margaret Scott Elementary school for a report of a burning car. After extinguishing the flames, firefighters found a man’s body inside the car. He was later identified as Huarleen Bain, 40.

An autopsy of Bain’s body determined that his death was a homicide, though police did not specify how he was killed. Police have called for tips on any information about his death, or his activities and whereabouts prior to the killing.

The most recent case covered by Crime Stoppers on Tuesday was that of Adau Duop, 25, a refugee from Sudan. She was killed on February 20 of this year when someone opened fire on the car she was traveling in with her fiancé and two young children in the 13800 block of Southeast Foster Road.

Duop’s fiancé and both children were shot and injured, but survived the ordeal.

“Seeing your mom or dad being shot and you shot in the process as well, your mom dying on the scene, that’ll probably never be wiped from their memory,” said Abdikadir Bashir, founding executive director of the Center for African Immigrants and Refugees of Oregon, shortly after the shooting.

OTHER STORIES: Neighbors create memorial in honor of woman shot to death in Northwest Portland

Portland police have identified at least 73 homicide victims since the beginning of 2022, though the total number of suspected homicides is somewhat higher. 2021 was a record-breaking year, with 90 homicides recorded.

Crime Stoppers of Oregon offers rewards of up to $2,500 for information relayed to them that leads to an arrest in any unsolved felony crime. Tipsters can remain anonymous. Anyone wishing to submit a secure and anonymous tip regarding any unsolved felony crime can visit http://www.crimestoppersoforegon.com/ or visit the app Store and download “P3 Tips” for any smart phone or tablet.