President Biden will return to Oregon next weekend 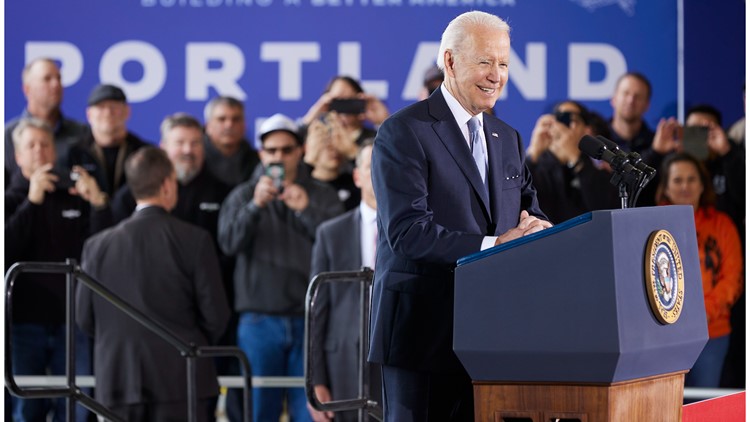 The trip will mark Biden’s second stop in Oregon this year, an unusually busy frequency for Oregon when it comes to presidential visits.

PORTLAND, Ore. — President Joe Biden will stop in Oregon next weekend as part of a West Coast trip. It will be his second time this year visiting Oregon, a state where presidential visits tend to be a rarity.

Biden will travel to California from Wednesday, Oct. 12 to Friday, Oct. 14 and then to Oregon from Oct. 14 to Saturday, Oct. 15, according to a Friday morning news release from the White House.

The press release didn’t include any further details about the timing, exact location or agenda of Biden’s visit. A spokesman declined to comment when asked if the visit had to do with campaigning for the upcoming midterm elections.

Biden last visited Oregon in April as part of a nationwide tour to promote the $1 trillion infrastructure bill that Congress passed late last year. Oregon is estimated to receive about $1.2 billion for transportation projects over the next five years.

In a speech delivered at a hanger near Portland International Airport, Biden highlighted several ongoing and planned upgrades to the airport as examples of the kind of infrastructure renewal that the new bill would bring.

RELATED: The history of presidential visits in Portland: From Kennedy to Biden

Biden’s visit next week comes just a few weeks before Americans are set to vote in the Nov. 8 midterm elections.

The typically deep-blue Oregon has emerged as a surprisingly competitive state this year, due in part to its three-way race for governor, where recent polls have showed Republican Christine Drazan with a narrow lead over Democrat Tina Kotek.