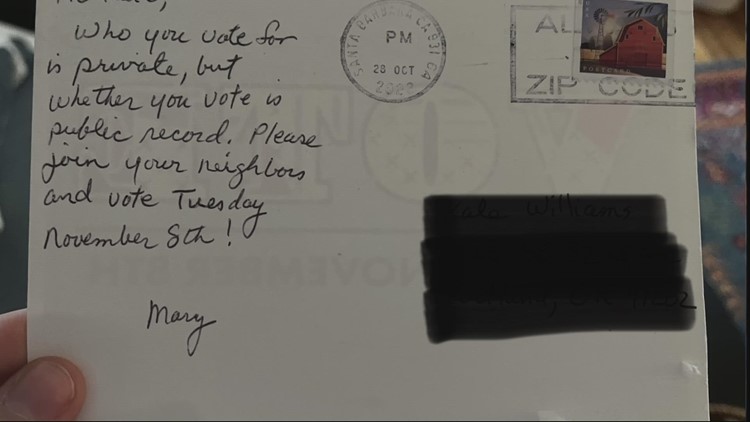 Some residents in Multnomah County have received handwritten postcards with aggressive reminders to vote.

PORTLAND, Ore. — A series of postcards that been making the rounds in Multnomah County leading up to Election Day have left some voters feeling concerned. The postcards contain messages urging people to vote, but some recipients have felt the specific wording is a bit threatening.

One of the postcards says “vote” on the front and, in a handwritten note on the back, says “Who you vote for is private, but whether you vote is public record. Please join your neighbors and vote Tuesday November 8th!”

KGW reached out to election offices in the Portland area and found that so far only residents in Multnomah County have received the postcards, although similar postcards have circulated in other parts of the country leading up to Election Day in the past couple of years.

Spokespeople for the Washington and Clackamas County elections offices said they haven’t seen any of the postcards circulating. There’s no indication from the postcards themselves as to who’s behind them.

A spokesperson with Oregon Secretary of State’s office said the postcards are simply a campaign tactic, even if they come across as aggressive.

Oregon State University professor of political science David Bernell said these kinds of campaigns to get people to vote are becoming familiar.

“I’m surprised that there is increasingly aggressive language and tactics in terms of getting your side out to vote, whoever the particular side is,” he said.

Multnomah County uses the Ballot Trax system, which allows voters to look up the status of their ballot by entering their first and last name, date of birth and residential ZIP code.

Anyone with access to that information for a particular voter could look up that voter’s ballot status information, although the system would not provide any information about how the voter filled out their ballot — it only says whether the ballot has been mailed out, returned and accepted.