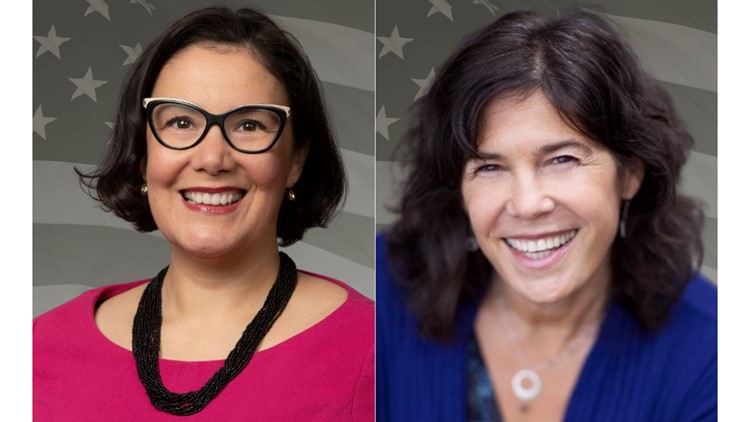 Commissioners Jessica Vega Pederson and Sharon Meieran are competing to become county chair, which would give them more influence over homeless services.

PORTLAND, Ore. — Voters in the coming November midterm election will soon decide on a new chair for the Multnomah County Board of Commissioners. It’s a powerful position, something like the chief executive of the county. And despite the City of Portland’s well-publicized consternation over how to address homelessness, it’s actually an office under the county’s umbrella that is supposed to coordinate homeless services and hold the purse strings.

It’s called the Joint Office of Homeless Services, and it was formed in 2016 to bring some coordination between the city and the county for all the money and effort being spent on homeless issues. The office has a budget of about $255 million and more than 90 employees — and it’s been a source of frustration for some time.

Two years ago, Portland Mayor Ted Wheeler threatened to pull all city funding from the JOHS, but ultimately relented. Now Wheeler and other Portland leaders are facing pressure to stop sending the agency money, instead directing that money toward the large sanctioned camps that Wheeler proposed.

It’s before this backdrop that the candidates for Multnomah County chair, sitting commissioners Jessica Vega Pederson and Sharon Meieran, campaign to take charge.

Before public comment on Mayor Wheeler’s homeless plan began Oct. 29, Wheeler had two guests that spoke before Portland City Council as his invited testimony. They were Pederson and Meieran, both of whom took the opportunity to stump for their campaigns and pledge their cooperation with the city on Wheeler’s goals.

Meieran holds a law degree and is an emergency room doctor. She was elected to the county board five years ago, then re-elected in 2020. She’s now running for chair.

Pederson spent 14 years working in tech, ranging from start-ups to Fortune 500 companies. She served in the Oregon legislature in 2013, ran and won election for the county board in 2016, and was re-elected in 2020.

One of them will soon run the county as chair. We asked each of them what they intend to do about JOHS. To begin, Meieran said that she would immediately call for an outside audit of the agency, part of a move to overhaul it.

“What I’ve seen is lack of data that I feel is reliable,” Meieran said. “When I ask deeper questions about data I get either told, ‘We don’t have that, that’s not what we collect. It will take a while to figure that out and we’ll get back to you,’ but (they) don’t get back to me. And so, that is a problem … I feel we’re not collecting the information that we need in order to make rational decisions about how we’re spending our taxpayer dollars.”

Vega Pederson agreed that changes need to be made.

“So, what we have and what is my big priority in becoming the next county chair is making sure we are running the Joint Office of Homeless Services so that it is both joint and a well-functioning office,” she said. “And I think people will say right now, neither of those things is happening. I know there have been issues with the City of Portland feeling that they haven’t had the ability to share their opinions, to have insight into what’s happening in the office, and that relationship is going to be very important if we’re going to be continuing moving forward.”

Both said that they believe the office serves an important function, and they would likely not make it go away. But with so much money running through an office that provides such vital services, each said that JOHS is in need of improvement.