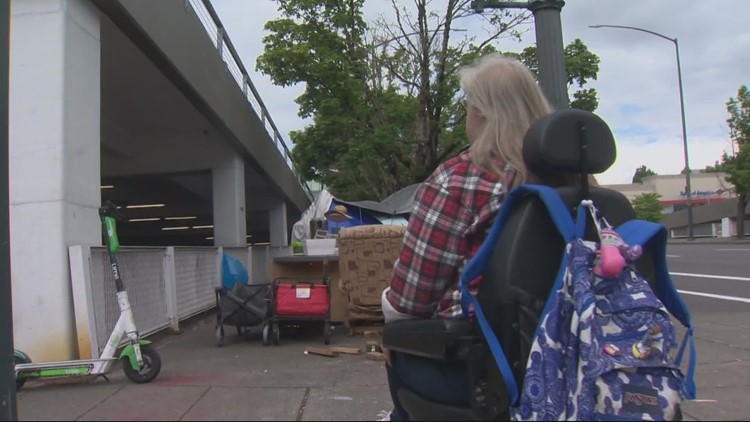 There are already a number of settlement meetings scheduled between now and January.

PORTLAND, Ore. — In early September, 10 Portlanders with mobility disabilities sued the city of Portland over homeless tents and debris blocking city sidewalks. It’s the first lawsuit of its kind in Portland.

“I have to sometimes go in the road to get around them and I don’t like it. It’s terrifying,” said Pauline Long one of the plaintiffs in the case who uses a motorized chair.

Long and the others argue the city is in violation of the Americans with Disabilities Act and the Federal Rehabilitation Act. They are asking the federal court for a few things:

The city originally responded to this lawsuit by requesting Multnomah County, the state of Oregon and Metro also be included as defendants.

RELATED: ‘It impedes our freedom’: Tents and garbage block ADA access on some Portland streets

According to court documents obtained by KGW, last week the city attorney’s office asked for an 85-day extension before filing a responsive pleading or motion.

Since the lawsuit was filed, the attorneys on both sides have met three times. They are scheduled to meet again on November first.

Both parties have agreed to mediation, meaning they won’t be taking this to a federal courthouse. There are already a number of settlement meetings scheduled between now and January.

Meanwhile the attorneys representing the Oregonians with mobility disabilities found Multnomah county’s Joint Office of Homeless Services gave 6,550 tents and 27,000 tarps to the homeless last year. Many of those tents and tarps are now blocking ADA access on the sidewalks.

It’s still unclear whether the city will make their quarterly payment of $10 million to the county’s Joint Office of Homeless Services, which is due on November first. The attorneys representing the plaintiffs argue, it’s that money which continues to allow the county to provide the tents and tarps which ultimately end up blocking the sidewalks. KGW reached out to commissioner Dan Ryan’s office to see if that payment is expected to happen but haven’t heard back yet.