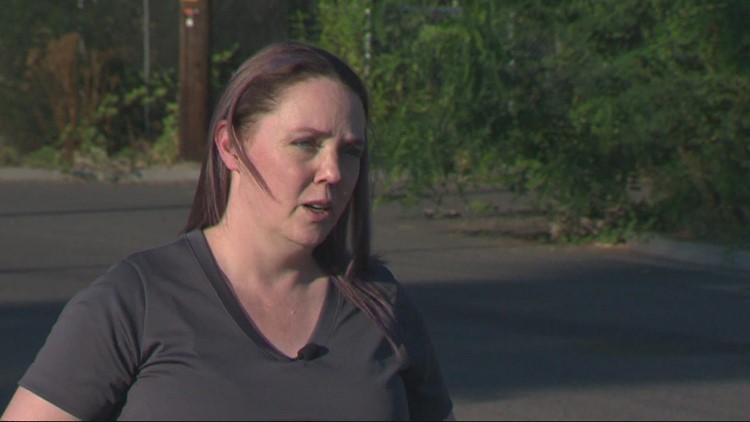 The victim said Portland’s Bureau of Emergency Communications made her wait 5 hours on hold over 2 days, before sending officers to take a police report.

PORTLAND, Ore. — Angie Jenkins is nursing a broken tailbone and some bruises after a hit-and-run on Saturday, Sep. 24.

Jenkins said she was at the intersection of Northeast 112th and Wygant Street when a man driving a minivan ran a stop sign and hit her truck. After pulling over, Jenkins said the driver told her he didn’t have insurance, refused to share his information and got back into his vehicle to leave. Jenkins walked up to his window to confront him.

“I told him, ‘Make better choices! Get out of the car, turn the car off, stop!’” said Jenkins.

Security video showed the man did not stop. Instead, he drove away causing Jenkins to fall and nearly running over her.

“When I found myself on the pavement I was just blown away that this guy just caused all of this and I knew there was going to be no consequences.”

Jenkins’ husband picked her up, took her to the hospital and called 911. He believes what happened next added insult to his wife’s injury.

“I let [dispatchers] know that this gentleman not only hit our truck but actually hit my wife with his vehicle,” said J.C. Jenkins. “And the lady on the line let me know that wasn’t an important enough call to call 911. She transferred us to the non-emergency line and then they hung up 30 seconds later.”

J.C. said he called the non-emergency line a total of nine times over two days and spent five-and-half hours on hold. Finally, he said on Monday morning, a dispatcher was able to send two officers to take a police report.

“They were polite, and they were kind, and completely helpless,” said J.C. “They flat told us, hey, thanks for this but there’s nothing we can do.”

By email, a Portland Police Sgt. Kevin Allen told KGW that officers wish they could do more:

“We try to be open and honest with our community that we have to prioritize our time. We do not currently have the resources to meet the demand for our services right now, and we’re always going to focus on violent crime and public safety emergencies first. We recognize that this is frustrating for members of our community who deserve to have their cases investigated. Officers tell me all the time that they wish they could do more. We all took this job to help our community, and it’s difficult when we disappoint those who are relying on us. This is a problem that’s being fixed through aggressive recruiting and hiring thanks to investments by City Council, but it will take a while for us to hire and train enough officers to catch up to the deficit.”

Jenkins said the suspect vehicle that hit her was a silver, 2006 Chrysler Town & Country minivan with Washington plates. She wishes someone with information on the case would come forward, but fears they would face the same frustrations by calling tips into the non-emergency line.

“They’re not going to answer the phone,” she said.

“Now, the only thing we can call our emergency services for is shootings and murders,” added J.C. “Other than that, you’re on your own, people. Buckle up. It’s gonna be a fun ride.”