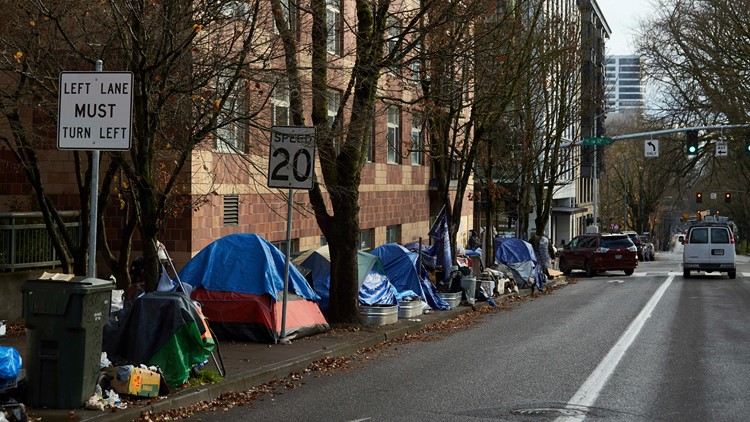 Local polling firm DHM Research was commissioned by business leaders to gauge Portlanders’ thoughts on the plan being debated before city council Thursday.

PORTLAND, Ore. — Voters in the Portland area are fed up with the state of homelessness in the city and overwhelmingly approve Mayor Ted Wheeler’s plan to ban unsanctioned public camping, according to a poll commissioned last month.

The study was conducted by local independent polling firm DHM Research and commissioned by the Portland Business Alliance, a coalition of local business leaders that has been clear about its support for the plan.

DHM polled 400 registered voters in Portland either by phone or online survey. The firm said that it set quotas by “age, gender, education, race, area of the city, political party, and May 2022 primary vote participation” to match the overall population of registered voters in the city.

Responses to most of the questions posed were unequivocal. Only 9% of voters approved of the job that City of Portland and Multnomah County elected officials were doing in response to homelessness, versus 86% disapproval.

Most relevant to the topic of discussion for Portland City Council on Thursday, an overwhelming 78% of respondents said that local officials should “require those camping on city sidewalks, streets and public areas to sleep only in shelters or authorized camping areas.”

Of the people polled, 14% preferred the contrary statement, that “local governments should allow people to live on public streets and sidewalks if they don’t want to move.”

The margin dropped slightly when respondents were asked a different question about prioritizing a housing-first or shelter-first method. 64% agreed that officials should “prioritize funding more shelters and designated camping areas as a first step toward permanent housing. It’s inhumane and dangerous to allow people to camp on streets and sidewalks.”

By comparison, 26% agreed that “even if it takes longer to move people off the streets, local governments should prioritize permanent housing. It is inhumane to force people to live where they do not want to and the only true solution to homelessness is to build more housing.”

When asked specifically about the five-part plan before Portland City Council, which includes the ban on unsanctioned camping, numbers were almost identical to the more general question posed before. 79% supported the proposal, while 18% opposed.

If homeless people refused to move to a shelter or sanctioned camping site, 75% of respondents supported police or other city staff forcing them to move.

Posed with a question about whether they approved of Wheeler’s proposal to create “designated camping areas” with services, security and sanitation, 82% of respondents supported the idea.

The poll was conducted over a period of four days, Oct. 29 through Nov. 1, and represented a relatively rapid turnaround for public policy polling, according to John Horvick, senior vice president at DHM Research. He indicated that the PBA had commissioned the poll after Mayor Wheeler introduced his plan, which was teased to the public after reporting by Willamette Week on Oct. 14 and fully revealed Oct. 21.

DHM had a deadline to be complete before the city council vote on Thursday, and began the polling just a few days after a Portland City Council meeting where public testimony on the topic lasted for hours.

“This emerged quickly, and so the conditions demanded that we move fast as well,” Horvick said. “It was definitely designed, timed in a way to get done in order to be available to the community and to decision-makers by (Thursday).”

Horvick said that DHM has worked with the PBA a number of times in the past. For the survey itself, DHM drafted the questions after being approached to do a poll on the issue of homelessness in Portland, and specifically around Wheeler’s plan, though PBA approved the questions before polling began.

“Usually they’re trusting our judgment and our experience to frame up questions in a way that’s going to most accurately understand the sentiment around the issues that they care about,” Horvick said.

Horvick acknowledged that the outcome of this poll in particular reflected a more definitive response than they are accustomed to seeing. Few questions on the poll received a response anywhere near DHM’s margin of error of 4.9%.

“A lot of times clients will come to us and say, ‘Gosh, we’re not certain where the public is at,'” Horvick said. “A lot of times that uncertainty is because the community is divided or they haven’t thought a lot about an issue, and so they haven’t had an opportunity to make it really clear to a client or decision-makers where they’re at. That’s not the case on homelessness in Portland, or on these policies.”

It wasn’t necessarily obvious heading into the poll that the responses would swing the way they did, Horvick added, because the public had not been privy to the specific policies proposed by Mayor Wheeler for very long. But voters have increasingly shown over the last few years that they are concerned with homelessness as an issue and want to see local leaders take action, he said.

“We’ve done other polling — not in the last month, but over the years — that Portlanders would like to see people be able to have somewhere to go other than be on the streets and accepting or supporting action to ensure that that happens,” Horvick said. “So these results weren’t surprising, the margins aren’t surprising. It wasn’t certain, I suppose, because these policies are new, but they’re wholly consistent with what we’ve seen — and the intensity of the support is consistent with what we’ve been seeing for quite a long time on these issues.”

RELATED: ‘I’m ready to go’: Homeless people face barriers getting off the streets due to felony charges

Despite the clear margins of the poll, the first Portland City Council meeting last week saw public testimony from a large number of people who opposed all or parts of Wheeler’s plan, particularly the piece that would widely ban unsanctioned camping and establish mass camps. Many of those who opposed this part of the plan were either experiencing homelessness or worked with homeless people.

In a follow-up town hall hosted at Blanchet House on Tuesday, homeless Portlanders gathered to give their feedback to Mayor Ted Wheeler and Commissioner Dan Ryan directly. According to a report compiled by the nonprofit Street Roots, “The largest theme was fear – and even terror – about mass camps, and and also, criminalization through a camping ban, which was also described as counterproductive.”

“With the camping ban, you’re saying that the one space we’ve carved out to sleep is now illegal and we’ve become common criminals,” said Kerry Robinson, whose testimony was quoted in the Street Roots report. “Who would run the mass encampment? Who would cover security? The National Guard? Would it be privatized? Am I free to come and go as I please? We’ve committed no crime except trying to sleep.”

Street Roots and the ACLU of Oregon called Thursday for the vote on Wheeler’s proposal to be postponed, alleging in part that “city officials are working with moneyed and business interests to push this policy forward” and that elements of the plan could be deemed unconstitutional.