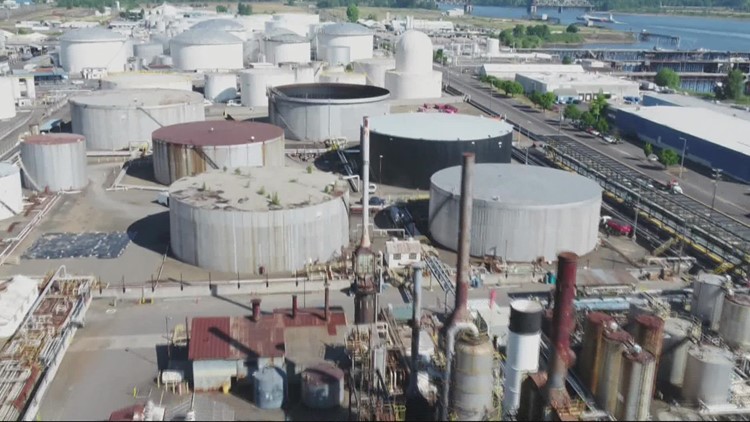 The announcement comes over a year after the city denied the company’s certification because it didn’t meet greenhouse gas emissions reduction goals.

PORTLAND, Ore. — Portland city officials have approved Zenith Energy’s plan to phase out crude oil at its terminal and move to renewable fuels in the next five years.

The announcement comes over a year after the city rejected the company’s certification because it didn’t meet greenhouse gas emissions reduction goals. The company has been planning to expand its operations since 2020 but needed a land-use certification from the city to move forward.

Zenith Energy’s oil terminal in Northwest Portland receives crude oil from trains, stores it in tanks and sends it via pipes to outgoing ships. The company plans to upgrade its facility to handle biofuel.

The Texas-based fuel distributor said it will stop moving crude oil over the next five years, disable eight railcar spots and remove 30 storage tanks next to the Willamette River. Zenith also has agreed to allow city inspectors immediate access to the terminal upon request.

Portland City Commissioner Dan Ryan, who oversees the development services bureau, said the terms are a step in the right direction and he expects the company to comply.

“We can help the city achieve its greenhouse gas reduction goals and address climate change by transitioning 100% of our crude oil storage to renewable fuels,” Reamer said.

This is the third time the company has applied for a land-use certification to expand its Portland terminal. The city’s approval is needed before the Oregon Department of Environmental Quality will consider an air pollution permit the company needs to continue and expand its operations.

Dan Serres, conservation director for the environmental group the Columbia Riverkeeper, said there’s still a short-term risk of an oil train derailment like the one in 2016 in Mosier, Oregon.

“Zenith is still gambling with the health and safety of everyone who lives along the train route for another five years,” he said.