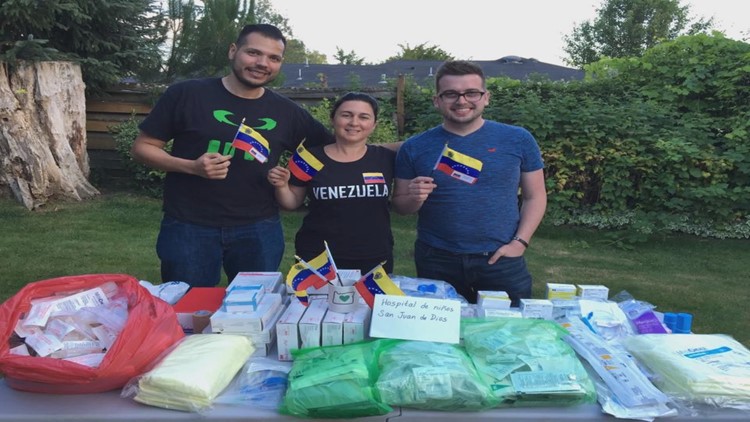 The nonprofit is called Venezuela’s Voice in Oregon and was started about seven years ago by Venezuelans in Portland.

PORTLAND, Ore. — A Portland nonprofit founded by a local group of Venezuelans has been providing thousands of pounds of medical supplies and food for the people who live in the country for the past seven years.

Giselle Rincon is the co-founder of the organization — Venezuela’s Voice in Oregon.

She is from Venezuela and moved to the Portland area with her husband and children in 2001. When she’s not working as a high school teacher, she and several volunteers are raising money for food, medical supplies and educational scholarships for people back home.

The country is dealing with a huge economic crisis, said Rincon.

“If you go to Venezuela right now, you will see a bubble of people that can buy everything and the majority of the people who can not buy anything,” Rincon said.

OTHER STORIES: How Oregonians can help with Hurricane Ian relief efforts

“We began collecting all kinds of food,” Rincon said. “Perishable foods, we decide to offer support to some elderly centers, nursing homes, then we decide that patients in the hospitals need support as well.”

In the past seven years. they’ve sent more than 14,000 pounds of food and medical supplies to 50 organizations in Venezuela.

Rincon said it’s also about education. The nonprofit helps with scholarships for students in Venezuela and here in Oregon. They range anywhere from $500 to $5,000.

“We noticed that many young people, especially Hispanics, they need two or three jobs in order to pay their college degree,” Rincon said. “We thought why don’t we give them some relief and support.”

In the past volunteers have taken trips to Venezuela. Rincon said it was heartbreaking to see all the need. She has a personal connection to the people in her country.

“We know there is a very complicated humanitarian crisis there,” Rincon said. “Having family and friends experiencing the difficulties, we’re not strangers to that.”

If people want to donate to the organization they can do so by going to the Venezuela’s Voice in Oregon website. There are also different GoFundMe accounts setup for their humanitarian efforts.