Portland development company houses the homeless, one apartment building at a time 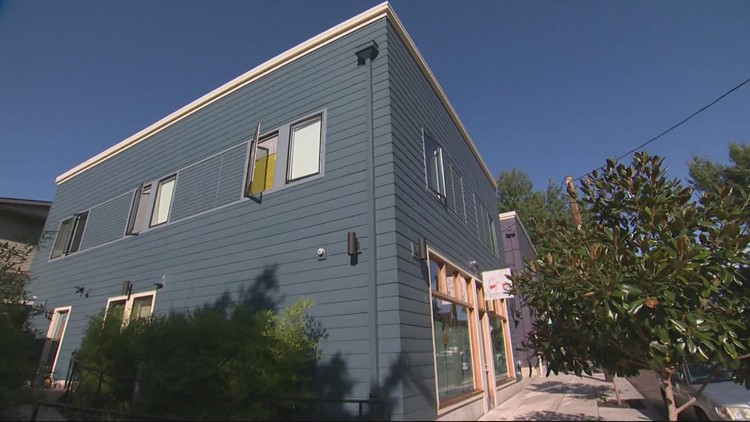 Guerrilla Development is also building affordable housing specifically for social workers where monthly rent will be about $1,000.

PORTLAND, Ore. — There are a handful of quirky, colorful commercial buildings scattered throughout the city of Portland, and private development company Guerrilla Development is the mastermind behind them.

Now the company is taking an innovative approach to tackling the crisis of housing and homelessness.

“We like weaving social repair into all of our projects right now,” said Kevin Cavenaugh, the owner of Guerrilla Development.

On the corner of Southeast Gladstone and 28th Place is one of his latest projects called “Jolene’s First Cousin.” It’s their first attempt at homeless housing.

“Living in the city, it’s impossible to ignore the homelessness crisis and the affordable housing crisis,” Cavenaugh said.

RELATED: ‘It’s a vital resource’: Homeless youth in SW Portland fear impending sweep will cut them off from nearby services

Inside the apartment building are 11 rooms where nine people currently live. Many of them were previously homeless. However, the building is more than just a place to sleep; it gives people stability and peace, something they didn’t get living on the streets.

“It’s a nice little community of a different type of people here,” said Quashera Alexander, who was homeless five months ago. Now she has her own room for the first time.

“I have a toilet, a bathroom, I can cook, don’t have to worry about if someone’s going to attack me,” she said while sitting at a communal kitchen table.

“Not everybody who is homeless wants to be homeless,” added Marlon Crump, who also lives at Jolene’s First Cousin. He has been homeless multiple times.

“When you’re homeless you have no security — you’re pretty much on your own,” he explained.

He’s been living at Jolene’s for almost three years. “It feels really good to come home,” he said.

Every tenant is connected to a case manager and rent is about $400 a month. The rest of the rent is subsidized by JOIN, a local non-profit focused on transitional housing.

“Coming off the streets and all of a sudden having to pay the prices for Portland housing can be a little daunting,” said Anthony Robertson, the landlord recruitment team manager at JOIN.

Affording high rent is just one less burden those living there have to meet. Instead they can focus on the future.

“If I can get into here and maintain it then I can get my own place again,” said Alexander.

“My hope is that other developers who can do this in their sleep choose to,” said Cavenaugh, “because we’re all Portlanders — we’re all stepping over people in sleeping bags trying to get to work or the grocery store, so why ignore that. Why not do something, even if it’s just 11 people at a time?”

Guerrilla Development is working on more projects like this one, including affordable housing specifically for social workers where rent will be about $1,000 per month. They plan to break ground on a new affordable apartment building for the homeless before the end of the year, and a third next year.