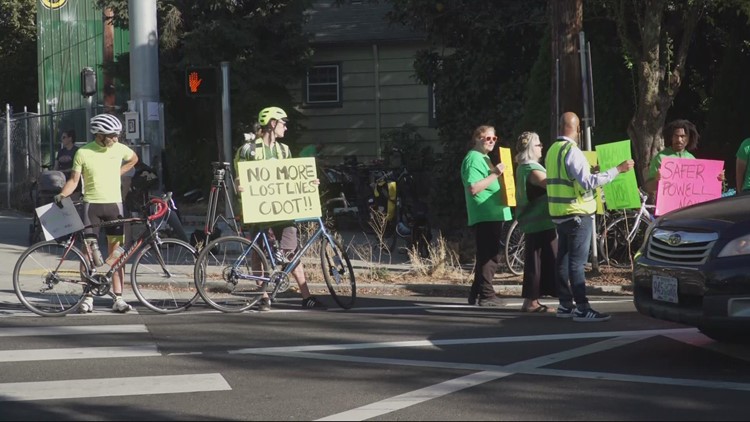 This comes after well-known Portland chef Sarah Pliner was hit and killed by a semi-truck while riding her bike on Southeast 26th Avenue and Powell Boulevard.

PORTLAND, Ore. — Cycling advocates in Portland are demanding more safety infrastructure at Southeast Powell and 26th Avenue after 50-year-old Sarah Pliner was hit and killed riding her bike by a semi-truck on Oct. 4.

“We really feel like Sarah’s death has highlighted how if we had safety measures in place perhaps her death could have been preventable,” said Sarah Iannarone, Executive Director at The Street Trust. “Because even though it might be a state highway on a map for those of us that live along these roads, they are our neighborhood streets,” said Iannarone. “We don’t get to choose. So, they need to be safe for vulnerable street users.”

Southeast Powell is one of Portland’s “high-crash corridors,” one of 30 streets where the highest number of crashes happen. Powell Boulevard is actually a state-owned highway, controlled by the Oregon Department of Transportation (ODOT), not the city.

Cyclists are demanding ODOT to implement safety infrastructure for those on bikes at the intersection.

This is after Sarah Pliner’s death last Tuesday – who was hit and killer by a Semi-truck. @KGWNews pic.twitter.com/FAVewyP7MR

“This is a corner we’ve known is dangerous for a very long time,” said said Kile Johnson, chair of Bike Loud.

He said Bike Loud has been advocating for more separation between cyclists and vehicles on Powell.

“Bike boxes sort of help people know that there’s people riding bikes that use the street. It produces a little more visibility. The city went ahead and removed the bike box and four years later we have someone who lost their lives at this intersection,” said Johnson.

Back in 2018, when it was removed, ODOT said it was to encourage cyclists to use 28th Avenue instead of 26th, a much tighter intersection at Powell.

ODOT declined KGW’s request for comment about the protests and demands for change this week. But spokesperson Don Hamilton spoke with KGW the day after Pliner’s death regarding the intersection.

OTHER STORIES: PBOT faces backlash from neighbors over removing a traffic circle and tree

“Powell Boulevard (U.S. 26) was originally established and designed as a highway to move freight and people through Portland quickly and efficiently. Recent incidents on Powell, including a tragic death on Oct. 4, are evidence that this road cannot, and should not, function as a traditional highway anymore. It’s time to make changes to ensure the safety of all users.

I have directed our team to evaluate possible options to quickly transform Powell into a safer roadway.

Recognizing that travel speeds dramatically affect the likelihood and severity of crashes, last year we reduced the speed limit on Inner Powell to 30. We also built pedestrian islands and signalized crosswalks that help make the currently-designed road function more safely by making bicyclists and pedestrians more visible. But the truth is that the design of the facility is so focused on traffic movement that more changes are needed.

In recent years, we’ve slowed traffic speeds, added protected crosswalks, installed wider bike lanes, and reduced travel lanes on our urban highways in Portland. We’ve even transferred ownership of an ODOT road to local control. To keep our community safe, no change is off the table.

To connect Oregon communities and connect Oregon to the rest of the region and the world, ODOT spent the last century building highways. These highways are and will remain essential as they continue to carry millions of Oregonians and billions of dollars of commerce every day. Our communities, businesses, and state need freight access in order to continue to thrive, but we know that we can increase safety for all users and still serve the needs of our communities and our state.

If changes result in slowing traffic down, I believe that is an acceptable tradeoff. My hope is that most people would make the same choice.

There will be a community forum on Oct. 20 at 6 p.m. at Cleveland High School. Representatives from the Portland Bureau of Transportation, ODOT, Portland Public Schools and TriMet will be there. I will be there as well. ODOT will be prepared to discuss ways we can make swift and meaningful changes to Powell Boulevard at this event. I encourage you to attend and bring your suggestions.”

Director of the Oregon Department of Transportation

“We have a school at this intersection, we have a park at this intersection and so it’s great to see our transportation leaders sort of acknowledging that the way we interact with the city has changed and now we’re sort of waiting to see what they’re going to do to follow up,” said Johnson.