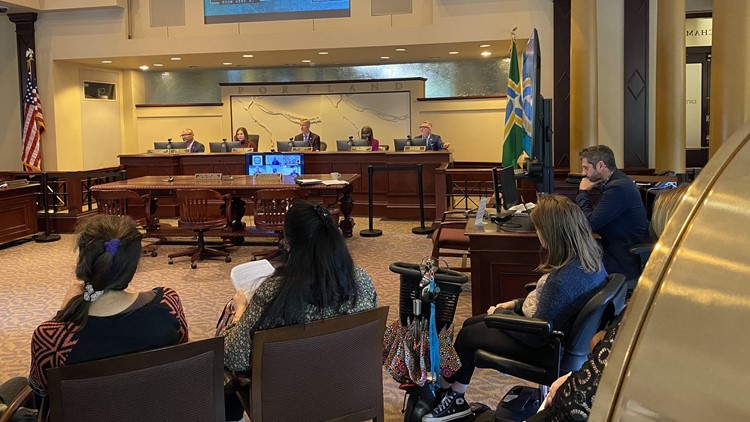 Portlanders had their opportunity Wednesday to argue for or against Mayor Ted Wheeler’s ambitious and wide-ranging plan to address homelessness.

PORTLAND, Ore. — Wednesday afternoon saw the beginning of public comment in a Portland City Council session that could stretch on well into the night, as Portlanders had their chance to voice opinions on Mayor Ted Wheeler’s sweeping plan to address homelessness.

More than 200 people have registered to testify during Wednesday’s session, which could last until 11 p.m.

Mayor Wheeler’s plan, released in full Friday as five separate resolutions, would require major cooperation from both Multnomah County and the state of Oregon to fully enact. Portland would need to ask state partners, including the governor and state legislature, to increase state and local funding for affordable housing.

The plan includes long-term goals for the city in terms of available housing. It calls for the construction of 20,000 units of affordable housing by 2033, as well as a landbank of up to 400 publicly owned sites suitable for multi-family housing development. Wheeler also called for the city to identify vacant or underutilized privately-owned properties for potential conversion into shelter space.

Perhaps the most contentious aspect of the plan is an eventual ban on unsanctioned camping throughout the city, phased in over a period of 18 months. This would require that all of Portland’s homeless people be directed into shelters of one kind or another: indoor congregate shelters, Safe Rest Villages and a handful of large, designated campsites. The mayor’s plan calls for three of these sanctioned campuses.

The council session will be streaming live on YouTube beginning at 2 p.m. Wednesday and could last through the evening.

“We were thrilled to see significant and actionable ideas about how to address in an urgent manor what we see on the streets every single day and that is a significant challenge to our business community, so we were thrilled,” said Andrew Hoan, president and CEO of the Portland Business Alliance, ahead of the afternoon session.

The Portland Business Alliance is just one of many interest groups expected to have representatives testify on the multi-part plan Wednesday, not all of whom are entirely in favor.

“I feel like that part of the plan really needs to be informed by people for whom it impacts,” said Kaia Sand, executive director of the nonprofit weekly publication Street Roots, “for whom, you know, it’s going to change their lives. And I think when you’re talking about policy that’s going to change people’s lives then they should be brought into the room.”

Street Roots’ focus is on homelessness and related issues — both employing homeless members of the community and advocating for their interests. Sand said that they are holding a viewing party of the hearing where homeless Portlanders will have a chance to testify virtually.

Council chambers is filling up with those who plan to testify in person. There’s also an option to testify virtually. @KGWNews pic.twitter.com/w9RocD0ajg

During opening remarks on Wednesday, Mayor Wheeler acknowledged that some of the city’s previous efforts to get people off the streets were largely unsuccessful but yielded important insights.

Many homeless people told outreach workers, Wheeler said, that they did not want to stay in indoor congregate shelters and would rather stay on the street. Some said that they would prefer an outdoor shelter where they could pitch a tent without fear of being forced to move, while having access to sanitation and other services.

“For many, designated outdoor camping, with services, would be seen as a significant improvement over their current conditions,” Wheeler said.

What remains unclear about Wheeler’s plan is how it would avoid falling prey to the same entropy that affects nearly every one of Portland’s ambitious proposals for addressing homelessness, of which there have been several. Commissioner Dan Ryan’s initiative for Safe Rest Villages has been slow to get off the ground, and a plan to host a “safe parking site” for car campers at the Portland Expo Center fizzled earlier this year. Nearly any proposed shelter inevitably faces stiff headwinds from neighbors, sometimes backed by legal action.

Even as several Safe Rest Villages and similar outdoor shelters have opened within the last year, others have closed or represent shelters previously located elsewhere.

Wheeler said that the city council did not plan to vote on these resolutions Wednesday, instead continuing the session to Thursday, Nov. 3 at 2 p.m. for additional testimony and votes.