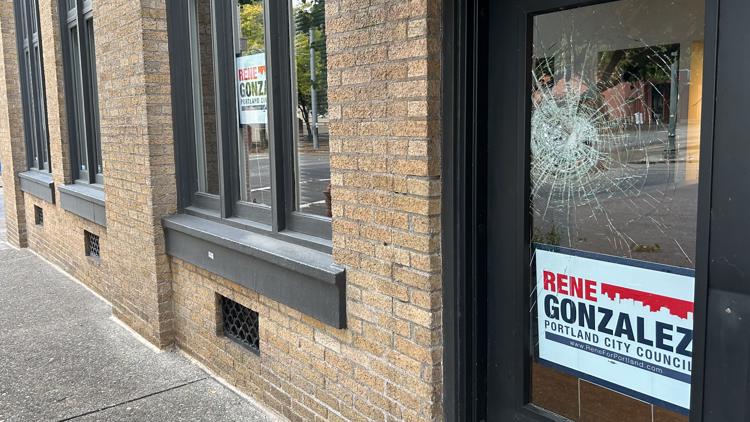 Officers responded to a report of vandalism Sunday morning at the campaign office of Portland city council candidate Rene Gonzalez.

Officers said on Sunday morning, they found two large windows shattered at the office on Southwest Salmon Street and 11th Avenue along with a rock inside the building. They estimate the damage to be worth around $8,000.

Police said they suspect the vandalism happened around 12 a.m. on Sunday. They have not released information on a suspect or a motive.

Gonzalez‘s campaign manager said this was the third time their office has been vandalized. The windows of the office were smashed back in September, along with six other businesses in the area and one vehicle. A 28-year-old suspect was arrested in that case.

Portland police said Saturday evening they were notified of a ‘direct action’ protest event that planned on gathering near the downtown and south waterfront area. Officers closed gates and locked doors at the Justice Center, the police bureau’s central precinct and the Multnomah County Detention Center— some locations which have been targeted in previous similar protests, according to police.

Officers said they increased patrols downtown as well as the south waterfront in addition to notifying those within the area, including Gonzalez’s team, to take precaution.

Officers are looking into the possibility of a connection between the ‘direct action’ protest and the vandalism to Gonzalez’s campaign office. They said the justice center was not damaged.

Gonzalez had encountered some controversy over this space in recent months after he faced $77,140 in fines and penalties for accepting and not reporting a significant discount on the campaign office space. On Thursday, a judge revoked the fine stating Gonzalez did not violate campaign finance rules.