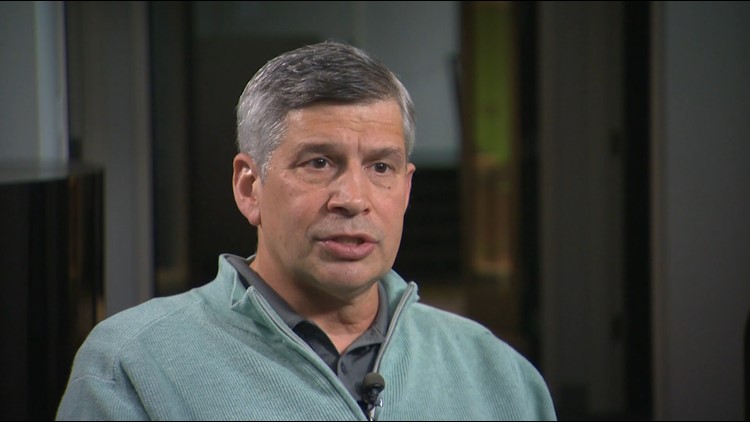 KGW is sitting down with both Portland city council candidates to hear their stance on the city’s homeless crisis.

PORTLAND, Ore. — With two weeks left until Election Day, KGW is sitting down with each candidate for the Portland city council to hear their stance on the homeless and housing crisis. Recent polls show that this is a top issue for Portland voters heading into November.

Here is the interview between KGW reporter Blair Best and Rene Gonzalez, lightly edited for length and clarity.

A couple of Gonzalez’s answers have been summarized or appended with additional context, and those sections are noted in italics.

The full interview can also be viewed below:

Best: How would you describe the state of Portland’s streets right now?

Gonzalez: They feel dangerous. They feel unwelcoming and sometimes unusable.

Best: You say, “City Hall’s ineffective ideologically driven policies are ruining the city we used to proudly call home,” what do you mean by that as it pertains to the homeless crisis?

Gonzalez: Well, we don’t drive the discussion with data. Let me be very specific, we tend to homogenize the issue and describe it entirely as an affordability challenge and you dig into the data particularly with respect to the unsheltered, those we interact with daily on the streets, we have a substantial crisis of disabilities one and two on that list are addiction and mental illness.

Expanding addiction treatment services, he said is dependent on partnering with the state and county.

Best: In your eyes, what isn’t working with how the city is handling the homeless crisis and how could you change that?

Gonzalez: Yeah, we’re not building nearly enough shelter and I define that very broadly everything from safe sleeping spaces to high-barrier shelter…We’ve underinvested in shelter. We’ve told Portlanders they need to wait to address some of the crisis on our streets until there’s enough affordable housing in the area that day may never come.

Best: You speak of prioritizing shelter well, what about the homeless population that refuses to go into shelter? Recent studies show the majority of people of the streets prefer to stay in their tents.

Gonzalez: Yeah so I think again we’re going to have to segment that and not treat the whole what I could call service resistant population of unsheltered population the same. There are folks that have legitimate concerns about going into shelter particularly low-barrier shelter…On the other end of the spectrum, if you don’t want to go into shelter because you have a gun, because you want to use hard drugs and you want to continue to engage with criminal activity then I think they need to face the criminal justice system.

Best: Do you really think that taking people off the streets and putting them into the criminal justice system, if that’s the only option, is the best approach since sometimes that just continues the cycle?

Gonzalez: If they’re engaging in car thefts, bike thefts, catalytic converter thefts, low level vandalism, if they are breaking into stores to feed habits and they happen to hide out in our unsanctioned camps, I think we absolutely have to disrupt that cycle.

Best: You say if elected you’ll work to remove RV’s and put them in safe locations. How will you do that and where are these safe locations?

Gonzalez: Yeah so, I think the mayor has already taken some steps there particularly in east Portland. We saw for an extended period of time we had RV’s parked in certain areas, we had cars parked for months approaching years without interruption, I think we are going to have to find safe parking spots in a general sense.

Best: What is your response to Mayor Wheeler’s five-part plan that he announced last week?

Gonzalez: I think directionally it’s a step in the right direction and I think it’s recognizing the urgency of the problem. I agree with the commitment that we need to be driving towards the end of unsanctioned camping in Portland.

Best: Are you behind all five resolutions or is there something that stands out to you as problematic?

Gonzalez: I think directionally I’m there. I’m supportive of it.

Best: You say if elected you’ll “immediately clean up parks and neighborhoods,” how do you plan to do that and what approach will you take that’s different from what the city’s already doing with clearing campsites and moving them to the next neighborhood?

Gonzalez: Yeah, I mean I think as we’ve kind of dug into the details of our unsanctioned camps I’ve sort of elevated the priority of going after the really hard criminal behavior that’s going on. I think early on in the campaign I didn’t fully appreciate how rough the criminal element was in some of our unsanctioned camps so first goal is to disrupt that criminality.

Best: How will you ensure that these ideas don’t just remain conceptual and how do you plan to get the rest of city hall behind you?

Gonzalez: Well, I think city hall is moving in the direction I’ve been articulating since I’ve entered this race…I am running against the most radical member of city council on these issues at times the most anti law enforcement at times the most passive with respect to addressing unsheltered camps and so you replace the most radical member of city council with someone who is more in line with where the city wants to go in addressing these issues, I think we’re going to have three to four votes consistently on a lot of the things I’m describing.

Best: If homelessness is someone’s number one concern. Why should they vote for you?

Gonzalez: I’m going to address the issue head on, I’ve been very direct from the day I entered this race about the crisis this is creating for our livability in the city. I haven’t looked at it with rose-colored glasses. I’ve looked at the data. I’ve studied the data and engaged consistently with those who interact with the homeless and unsheltered so and I have a history of working on complex problems.