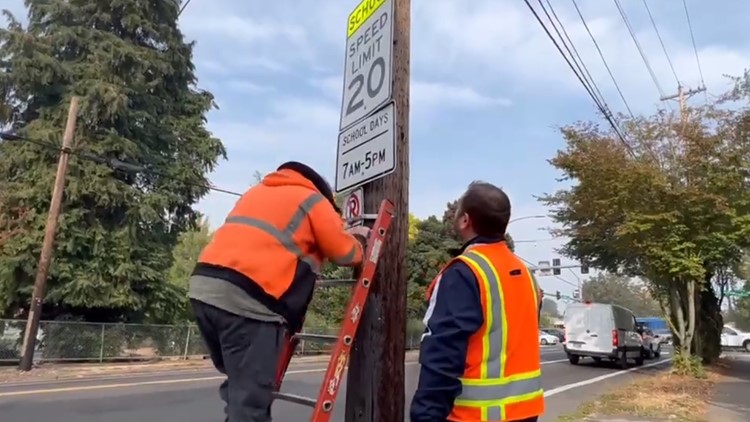 Cars will have to slow down from 25 to 20 MPH moving forward on both Powell Blvd and on 26th Ave in this new school zone.

PORTLAND, Ore. — Some big traffic changes were made to a dangerous Southeast Portland intersection Thursday morning — hours after the city council voted unanimously for the improvements.

People have pushed for these changes for years, but nothing has happened until this week, when Portland City Commissioner Jo Ann Hardesty, who’s running for re-election, proposed the immediate traffic changes. They were voted in on the same day.

Cars will have to slow down from 25 to 20 mph moving forward on both Powell Blvd and on 26th Ave in this new school zone. Also approved by city council, any other schools on state-owned highways — like Powell Blvd — will have to be designated school zones as well.

I’ll have more tonight 4/5pm from PBOT and neighbors living nearby ⁦@KGWNews⁩ pic.twitter.com/hJqLFARsh7

This change comes days after a Cleveland High School student was hit at the intersection of 26th Ave and Powell Blvd and two weeks after the death of Sarah Pliner who was hit and killed by a semi-truck.

Rivera said they are determined to collaborate with Oregon Department of Transportation (ODOT) to make roads safer to drive, walk and bike around.

“We all need to today to be more mindful and travel more safely,” said Rivera. “And we can reduce and eventually eliminate all traffic fatalities from our streets.”

Powell Blvd is one of Portland’s high crash corridors. Along the entire seven and half mile stretch, 17 people have died since 2017.

But neighbors living off 26th Ave are a bit concerned at how drivers will follow these new school zone rules.

“I think it’s good that they’re actually doing something although I think more could be done,” said Christopher Braun, who has lived off 26th Ave for seven years. “One of the problems is if they just reduce the speed limit that’s great. But, if there’s no one to enforce it, no one pays attention.”

A community safety forum for SE Powell will take place at the Cleveland High School auditorium at 6 p.m. on Thursday, Oct. 20.