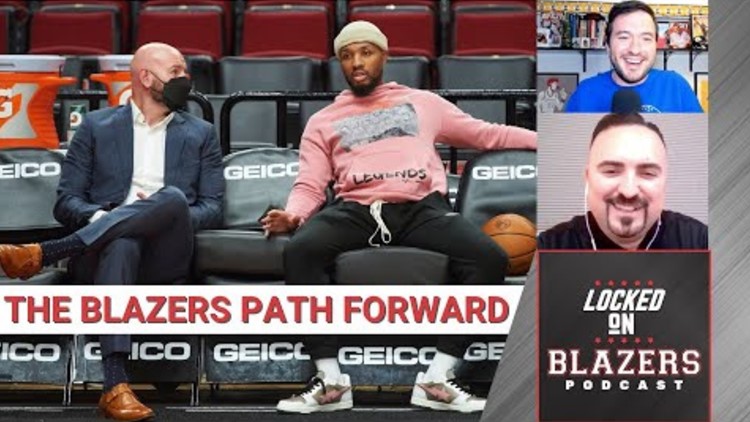 The two veteran Portland sports reporters covered a lot of topics about the Blazers, including what media day was like this year, how new general manager Joe Cronin has changed the vibe around the team, who should start at small forward, the potential impact of new starting power forward Jerami Grant and expectations for Anfernee Simons in Year 5.

They also talked about what Blazers fans should expect this season from rookie Shaedon Sharpe, the Blazers’ highest draft pick since they picked Damian Lillard with the sixth overall pick back in 2012.

Watch the entire episode here or on KGW+ on Roku and FireTV apps.

Here’s an excerpt from their conversation about Sharpe:

Mike Richman: Shaedon Sharpe is probably the most exciting new part on this roster, with all due respect to Jeremy Grant and Gary Payton. What are your impressions of Sharpe as a kid, as a 19-year-old, and as a player. What are your hopes for him this season?

Orlando Sanchez: What did they dub him? The mystery man? During the draft? I still kind of feel that way, because we really have only seen him play for like a couple minutes in Vegas and saw him hit a jump shot and that was pretty much it.

Richman: A sweet-looking jumper though. Great touch. … Do you think he plays early in the season?

Sanchez: I do, I do. I think they’re going to give him some run. I think more than anything is you’ve got to see where he’s at, in a game, in competition, not at the facility where you know things are controlled. Let’s just see how he reacts in different situations and then go from there. Then you build on it, like you know any manager would do with their employees, let’s see how much they can do and then we’ll go from there. Then we’ll set those parameters.

Richman: Yeah, pull them back if they can’t handle it or give them a little more rope if need be. I will say early in the summer, the way they were talking about him, the way Joe [Cronin] and Chauncey [Billups] talked about him in various interviews, I thought Shaedon Sharpe had an outside chance to be part of the regular rotation on night one. I will say, just reading the tea leaves, based on the way that Cronin was talking [at media day], I think he’ll play early, like the first month, but I wouldn’t be surprised if we don’t see him right away. In the first five to six games, I wouldn’t be surprised if you get zero Shaedon. Because the way they were talking again — this is literally just like parsing the words they chose — is that he’s gonna need a little time. I think that was the vibe I got, and that was a very different vibe than what I felt earlier in the summer. And maybe they’ve just seen him a little bit more and they’re like, ‘Yeah, this dude’s really talented, but …’. And I don’t think it’s a big deal if a 19-year-old isn’t ready to play in the NBA. That seems fine to me.

Sanchez: You’ve mentioned this on multiple episodes about the amount of teenagers that actually make an impact in Year 1 and it’s just so rare. I don’t think that’s unrealistic at all. And like you said, even reading between the tea leaves and taking a bigger step back, the moment that they signed Dame to the extension, it’s: ‘Let’s win now. Let’s do what we need to do to win now.’ Then we can develop our second project, but priority No. 1 is let’s get the right guys on the floor so we can win games and make the playoffs.

Richman: Even Dame was talking about Shaedon Sharpe —  effusive praise, really excited about him, really excited about him. But he was like, ‘You know, whenever he’s ready, whenever that is, later in the season or in Year 2.’ And I was like, ‘Oh, I see.’ And maybe that’s Dame being like, please don’t put the 19-year-old out there with me when I want to make the playoffs

Sanchez: Right. I think there’s some truth to that as well. I mean, I remember even Dame was kind of tempering expectations with Anfernee [Simons] and then we kind of got to a point where he was like, ‘No, Anfernee’s that guy, and he’s going to be a dude in this league.’ You know, there was just time, and I think that is a smart play on Dame’s behalf.

Richman: Yeah, I mean, if you’re talking about someone who gets it, Damian Lillard is someone who absolutely gets it.

RELATED: Here’s how many games ESPN projects the Trail Blazers to win