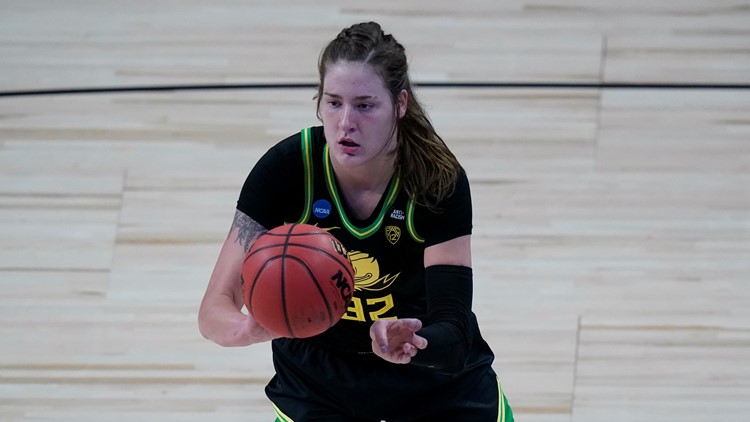 Prince, a preseason all-Pac-12 selection, has also chosen to pursue a professional basketball career after surgery next month.

Prince, a preseason all-Pac-12 selection, has also chosen to pursue a professional basketball career after surgery next month.

In a news release, Prince said she was “heartbroken” and that she tried to push through the injury, but after extensive evaluation by doctors, decided to leave school to focus on rehabilitation and recovery.

“Not being able to play with my teammates this year is painful and tragic for me,” Prince said. “However, I’m so grateful for the entire community of Eugene for their continued support and inspiration to always push forward through adversity.”

The redshirt-senior graduated in May with a degree in general social science. She will be honored prior to Oregon’s exhibition contest against Carroll College at 6 p.m. tonight at Matthew Knight Arena.

“We are going to miss Sedona,” Graves said. “She has done so many wonderful things and has been an incredible representative of our program and the University. Her impact on collegiate athletics, especially in the area of gender equity, has been immense and will be felt for generations to come. I wish her only the best in all of her future endeavors.”

Last year, Prince posted a video that went viral on social media showing the significant differences between the weight rooms at the women’s and men’s NCAA tournaments. The video garnered millions of views and led the NCAA to make changes to address the glaring inequities.

The Texas native led the Ducks and ranked fourth in the Pac-12 with her 54.2 shooting percentage from the field last season. During her three-year Duck career (50 games), she averaged 9.5 points per game while shooting 54.3 percent from the field with 4.4 rebounds per game and 1.4 blocks a game.

Prince made a career-high 18 starts and 30 appearances in 2021-22, scored in double figures 16 times and shot 50 percent or better from the field in 20 of 30 contests, including six of the last eight to close the campaign.

She was also named to the Lisa Leslie Award preseason watch list for the first time in her career; an honor that’s awarded annually to the nation’s top center.

“I will always love this challenging program and its ability hold me accountable and to always elevate my game,” Prince said. “The Eugene community took this Texas girl in immediately and made me feel like family. I will forever cherish the relationships and experiences I have made here on this journey.”