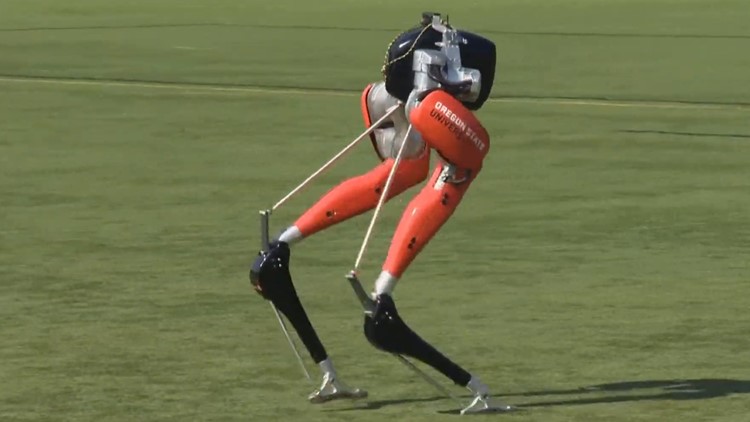 The robot recently set a new Guinness Book World Record, and now researchers are looking to see what else it can achieve.

CORVALLIS, Ore. — It doesn’t have arms, a head or even much of a torso, but that didn’t stop it from getting into the record books on the running track at Oregon State University.

A robot named “Cassie” clocked in at just under 25 seconds in the 100 meter, landing it in the Guinness Book of World Records — a feat made all the more impressive by the fact that Cassie did it without the use of any arms or eyes.

“It’s just a robot with legs and a small torso, and Cassie is blind. The idea is to see if we can make Cassie as robust as a human on two legs,” said PHD student Jeremy Dao, who’s been working on this research project.

The robot is controlled by a large remote that tells it how to move and in which direction. Cassie has no perception about the world around it, Dao said, and it only gets the commands that the researchers send to it.

The group is working Agility Robotics, an Albany-based company that developed a robot called Digit a couple of years ago. Digit is designed to work in a warehouse and eventually replace humans in performing certain repetitive and (for people) injury prone-tasks.

That sort of functionality is a rapidly-growing new field in robotics, and companies are increasingly willing to invest in new technologies in that area.

It’s that kind of development that Alan Fern, Professor of Computer Science and Robotics, thinks could be in Cassie’s future.

“I see this going in a number of directions,” he said. “Research-wise, we want to put eyes on Cassie now and do careful planning of your footsteps.”

Students on this project know there will be a few missteps in the process, but Dao said they want to push the limits and see what else they can do. While they don’t what those limits are right now, he said, they’re confident it’ll pay off in the end.