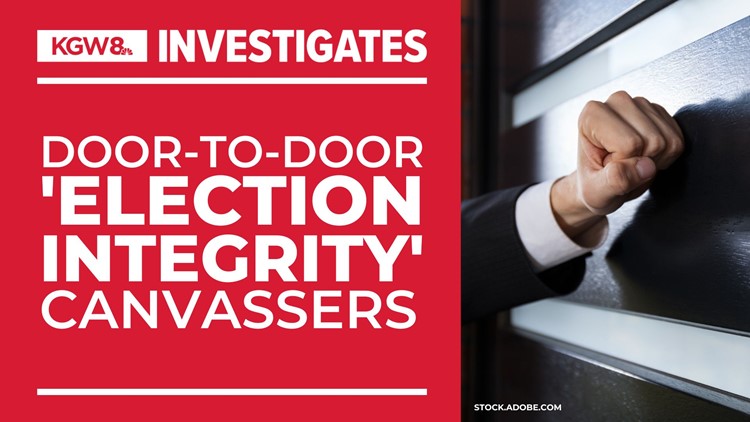 Voters in at least four Oregon counties — Douglas, Klamath, Lane and Columbia — have complained about people knocking on doors and questioning residents.

PORTLAND, Ore. — A voter in Roseburg was confused after someone knocked on her door last month asking questions about the November 2020 election. The canvasser carried an official looking document titled, ‘Douglas County Resident Affidavit’ that included questions about her voting history and voter registration.

Following the interaction, the woman contacted the Democratic Party of Douglas County.

Voters in at least four Oregon counties — Douglas, Klamath, Lane and Columbia  — have complained to local election officials about people knocking on their doors, questioning residents and searching for evidence of voter fraud.

Klamath County Clerk Rochelle Long issued a press release on Sept. 9 after residents called her office asking if the group was from the local elections office.

“I wanted to make it clear they were not from our office,” said Long. “We don’t go door to door. We don’t ask you how you voted.”

Long warned that members of the group may hand out business cards and identify themselves as an ‘Integrity Group’. Long couldn’t point to any one person or group responsible for the effort.

Election officials across the country have received similar complaints about people hunting for proof the 2020 election was fraudulent by going door to door. To be clear — it wasn’t. Nearly two years after the November 2020 election, there’s been no widespread voter fraud found anywhere in the U.S.

OTHER STORIES: No, there weren’t 23,203 registered voters in Wisconsin with the same phone number during the 2020 election

An NPR report found election denial influencers have been traveling around the country to spur these sorts of citizen investigations.

In Oregon, there’s no process for a third party to challenge a voter’s registration — only election officials can do that, explained Oregon Secretary of State Shemia Fagan.

“What these folks are doing is simply out trying to gather data in an unofficial way and then unfortunately we’re seeing people misusing that data to try and spread the big lie,” said Fagan. “The election in 2020 was safe and secure in all 50 states. There’s simply no evidence that there was anything amiss or that that election was stolen from Donald Trump.”

To combat misinformation, Oregon’s election officials launched their own campaign ahead of the midterms with public service announcements emphasizing that elections are secure.

OTHER STORIES: Silly though they seem, campaigns know that political ads serve a purpose