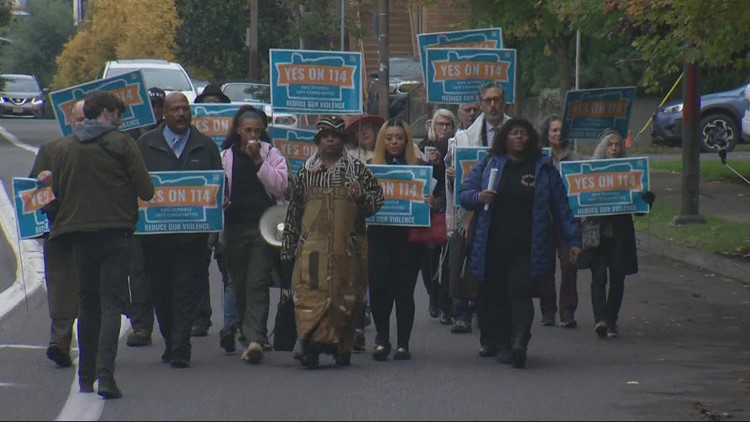 Measure 114 would increase gun control in Oregon, and if passed it would be the strictest gun control measure in the nation.

PORTLAND, Ore. — Civil rights leaders and supporters of Measure 114 took their voices to Dawson Park Thursday morning as Election Day is less than a week away.

A recent poll put out by Nelson Research — a public opinion research firm based in Salem — asked 577 likely Oregon voters their thoughts on Measure 114.

Antoinette Edwards, the retired director of Portland’s Office of Youth Violence Intervention, tells KGW she has been fighting for a measure like this her entire life.

“I have watched too many young people lose their lives and cross the yellow tape lines,” said Edwards. “In fact, I always bring young people with me every time I speak to be reminded of why we must do something different. We have to.”

To purchase a gun in Oregon, Measure 114 would require a permit issued by police, require a photo I.D., fingerprints, firearm training, a background check, and a fee. It also would ban magazines that hold more than 10 rounds of ammunition.

Oregon State Sheriffs’ Association along with various hunting and shooting groups are oppose of the measure, saying it will not prevent violent crime or mass shootings because criminals won’t comply with it, only law abiding gun owners would be restricted.

RELATED: Students across Oregon walked out of class to support Measure 114

“We recognize that we must address firearm violence,” said Shane Nelson, president of Oregon State Sheriffs’ Association. “But measure 114 is just not the answer.”

“No where in 114 is anyone said that we’re coming after your second amendment right,” said Reverend Dr. Matt Hennessee of the Interfaith Peace and Action Collaborative.