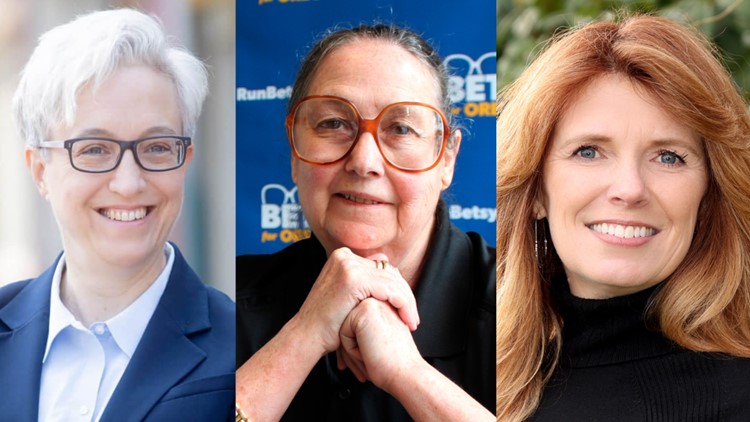 PORTLAND, Ore. — Election Day is Tuesday, Nov. 8. KGW caught up with each Oregon gubernatorial candidate in their final push over the weekend. According to recent polls, Democratic candidate Tina Kotek and Republican candidate Christine Drazan are still neck and neck with Kotek slightly in the lead. Unaffiliated candidate Besty Johnson fell behind with just 8% of voter support.

The race for governor has been the most competitive Oregon has seen in recent history. All three candidates are taking the final days before the election to travel the state and meet with voters.

Democratic candidate Tina Kotek met with Planned Parenthood leaders and other supporters on the campaign trail Sunday in Northeast Portland to kick off a canvassing event.

“This is democracy. This is how we win and you are beautiful. Thank you,” Kotek said to a room of about 40 supporters.

She talked about reproductive freedom, protecting the environment, public education and standing up for the working class.

“I have been a change agent in the legislature, making sure we can help working families move forward in our state as governor,” Kotek said in a one-on-one interview with KGW after the event. “I’m going to work hard with everybody around the state to make sure people can be successful. Stand up for working families and make sure we have the state we all want to have.”

Meanwhile, Republican candidate Christine Drazan was in the state capitol starting her tour of six stops which ends in Clackamas County on Monday.

“This election is our opportunity to turn our state around,” Drazan said to a room of supporters.

She talked of supporting police, safer communities and fighting repeal ballot Measure 110. If elected, she would be Oregon’s first Republican governor since the 1980’s.

“We’ve come up short far too many times not this time … If we’re going to have a better future of our state, if we are going to address the homeless crisis on our streets, have more affordable community, and in fact have better stronger schools, we can’t choose more of the same we have got to vote for change,” Drazan said.

Not holding an event Sunday was unaffiliated candidate Betsy Johnson. Instead, she made the rounds at small businesses in the Portland metro. Last week, she toured rural cities.

“We are caring way too much right now about who wins the horse race. Does the democrat win, does the republican? We ought to be focused on how are we going to govern,” Johnson said.

Over the past few weeks, support for democratic candidate Tina kopek has grown, according to an Emerson College poll released Friday. Forty-four percent of voters support Kotek and 40% back Drazan. Johnson lags behind with just 8% support.

All gubernatorial candidates had one final message for voters and that was to vote. Ballots must be mailed or returned to an official drop box on or before 8 p.m. on Election Day.