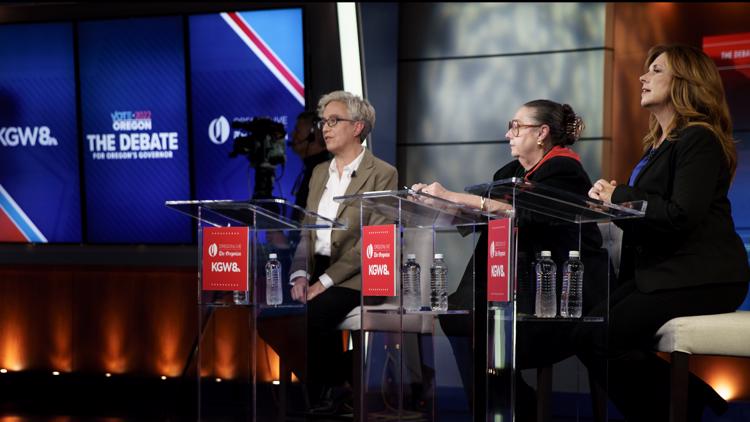 Both unaffiliated candidate Betsy Johnson and Democratic candidate Tina Kotek are in favor of abortion rights while Republican Christine Drazan is anti-abortion.

PORTLAND, Ore. — With less than two weeks until the Election Day Democratic candidate Tina Kotek, endorsed by Planned Parenthood, is traveling the state touting her record on reproductive rights in Oregon.

“I helped pass the strongest legislation in the country to protect reproductive health care for Oregonians,” said Kotek. “And that’s all kind of healthcare. And it also includes abortion. That would all be at risk if there was a Republican governor.”

But that’s not exactly true, according to a political analyst.

“An outright ban would probably completely be off the table,” said Patrick Sieng, a Lobbyist with Public Affairs Counsel. “I think you would have to basically have full control of the governor’s office and the legislature.”

Sieng believes more would need to be done in order for a Republican governor to ban abortion all together at this point.

.⁦@TinaKotek⁩ was at the PSU campus this morning talking about abortion and reproductive rights.

I’ll have Kotek’s and the other two gubernatorial candidates’ thoughts on abortion tonight at 4/5 @kgwnews pic.twitter.com/mflYN9RZ4o

Abortion rights are written into Oregon’s state constitution. There would need to be a Republican governor who’d agree to ban abortion and both the state house and senate would also have to be Republican controlled. And with the legislature being majority Democrat, it’s unlikely, said Sieng.

“I would say given Oregon’s progressive nature, on abortion itself, and politics in general, I would see that as a very extreme position to take,” said Sieng.

Republican candidate Christine Drazan even knows how much of a long shot it would be in Oregon. She said this in the KGW-Oregonian debate last week when asked her position.

“Abortion is legal in Oregon,” said Drazan. “And as governor, it will remain so. And people from other states would be able to come into Oregon to receive abortion services.”

But this isn’t to say she couldn’t stop abortion funding all together.

“If Christine Drazan did become governor, we probably won’t see as much promotion, or any efforts to expand access to abortion from her office,” said Sieng.

Unaffiliated candidate Besty Johnson had this to say during the KGW-Oregonian debate.

However, Johnson agreed with Drazan that she would not put taxpayer money toward supporting people from other states in accessing abortion in Oregon. Kotek alone said that she would support that step.