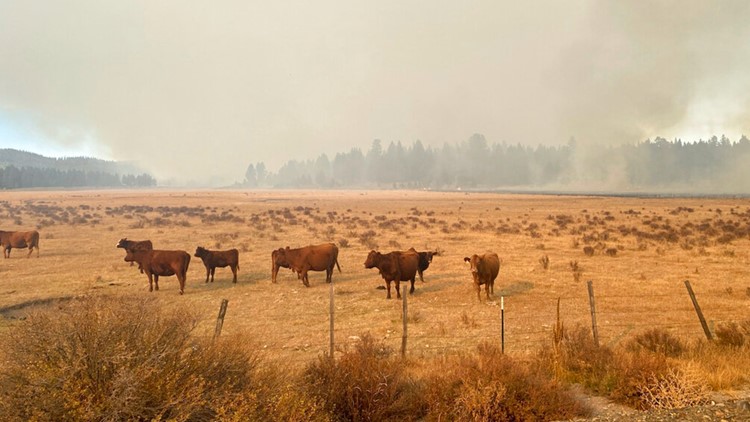 A ranching family in Oregon is applauding the arrest of the leader of a U.S. Forest Service crew whose planned burn spread to their property.

SALEM, Ore. — When U.S. Forest Service personnel carried out a planned burn in a national forest in Oregon on Oct. 13, it wound up burning fencing that a local family, the Hollidays, uses to corral cattle.

The crew returned six days later to restart the burn, but the flames then spread onto the family’s ranch and resulted in the arrest of “burn boss” Rick Snodgrass.

Repercussions of the singular incident in the remote corner of eastern Oregon have reached all the way to Washington, D.C., where Forest Service Chief Randy Moore denounced the arrest. But the ranching family is applauding Grant County Sheriff Todd McKinley’s actions.

“It was just negligence, starting a fire when it was so dry, right next to private property,” said Sue Holliday, matriarch of the family.

The incident has once again exposed tensions over land management in the West, where the federal government owns nearly half of all the land.

In 2016, that tension resulted in the 41-day occupation by armed right-wing extremists of the Malheur National Wildlife Refuge in adjacent Harney County to protest the imprisonment of two ranchers, Dwight Hammond and his son Steven, who were convicted of arson for setting fires on federal land.

In a telephone interview, Tonna Holliday, Sue’s daughter, said whoever was responsible for burning up to 40 acres (16 hectares) of their property should face justice.

However, the Hammonds were convicted of felony arson for intentionally setting fires on federal land, including a fire set to allegedly cover up their slaughter of a herd of deer. Snodgrass is being investigated for alleged reckless burning, a misdemeanor.

The practice of mechanical thinning and planned fires in overgrown forests is credited with saving homes, for example during a 2017 wildfire near Sisters, Oregon. But some efforts have gone terribly awry, including causing the largest fire in New Mexico’s history earlier this year. Several hundred homes were destroyed, livelihoods of the rural residents were lost and water supply systems were compromised.

The federal agency acknowledged in a review that it failed to consider the historic drought and unfavorable spring weather conditions as fire managers attempted to reduce flammable undergrowth in northern New Mexico.

Moore said following the review that the agency must account for its actions. This week he told Forest Service workers that he’s got their backs.

“Prescribed fire is a critical tool for reducing wildfire risk, protecting communities, and improving the health and resiliency of the nation’s forest and grasslands,” Moore said on the Forest Service website. “I will aggressively engage to ensure our important work across the country is allowed to move forward unhampered as you carry out duties in your official capacity.”

Forest Service spokesman Jon McMillan said the fencing that was burned on Oct. 13 has already been repaired.

“We regularly plan and conduct prescribed burns in areas with allotments fences and it’s standard practice to fix any fence posts damaged by the burn,” he said.

Over the past dozen years, prescribed fire has accounted for an average of 51% of the acreage of hazardous fuels reduction accomplished, or an average of 1.4 million acres per year, the Forest Service says.

Grant County covers 4,529 square miles (11,730 square kilometers) — four times the size of Rhode Island — and is studded with forests and mountains, blanketed by grasslands and high deserts. Only 7,200 people reside there, many tracing their Oregon roots back to wagon train days. The Hollidays and other ranchers used to drive hundreds of cattle annually through the nearby town of John Day, in scenes reminiscent of the Old West.

The Holliday ranch covers more than 6,000 acres (2,400 hectares) and has about 1,000 head of cattle. This time of year, before the snow falls, the cattle are being driven from the family’s grazing allotments in the Malheur National Forest onto a large pasture holding area, and then onto the ranch.

On Oct. 19, dark gray smoke from the prescribed fire loomed over some of the cattle as they grazed in the pasture. Soon enough, the fire jumped onto the Holliday’s ranch. It burned large stands of ponderosa pines that Tonna Holliday’s uncle, Darrell Holliday, said he helped plant two decades ago.

Grant County District Attorney Jim Carpenter on Tuesday defended the arrest of Snodgrass, who was handcuffed and taken to the county jail before being conditionally released. Carpenter said an investigation into the case could last for weeks or even months and that once it’s completed, he’ll decide whether to charge Snodgrass.

“We’re just standing up for what we believe in, and this is our land,” Tonna Holliday said. “And that’s really what it comes down to.”

She dissociated the family from extremists like Ammon Bundy, who led the Malheur National Wildlife Refuge takeover. The Bundy family has a history of opposition to the federal government. Bundy’s father had refused to pay federal cattle grazing fees in Nevada, leading to an armed standoff there in 2014.

“The Bundys, they were extreme,” Holliday said. “They didn’t pay their grazing fees. We believe in paying off grazing fees, running our cows out there responsibly, working with our range management and doing it that way.”