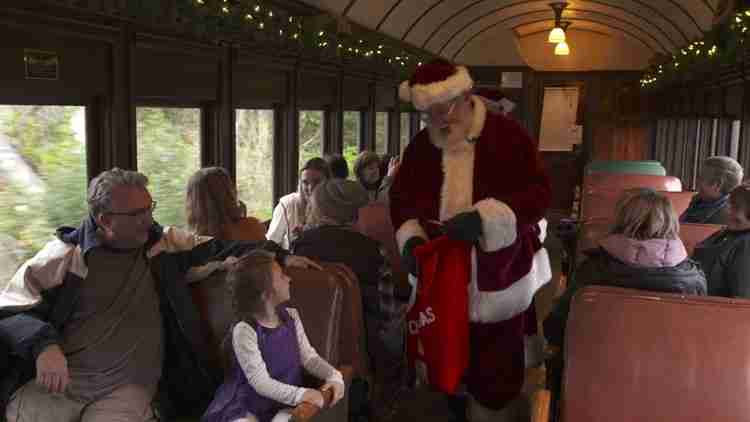 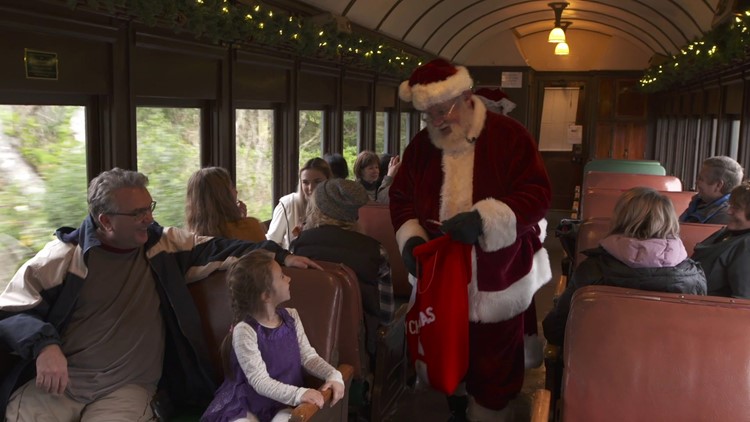 The Candy Cane Express takes on passengers at the Garibaldi Depot up three times on select December weekends for an hour ride along the coast.

GARIBALDI, Ore. — This week, we travel in unique fashion to enjoy the holiday season! We ride the rails along the Oregon coast aboard a Christmas Train that’s all decked out with decorations, hot chocolate and plenty of season’s greetings.

You can tell a lot about a community’s holiday spirit by the celebrations they hold onto. Tillamook County’s port village, Garibaldi, has a dandy!

On an early December morning, railroad engineer Tim Thompson preps the business end of the Christmas Train, a Prairie 2-6-2 steam engine that roars to life in billowy clouds of steam.

“When one of these steam locomotives is hot, they really attract a crowd,” said railroad engineer Tim Thompson.

“It’s like a big industrial furnace,” added Thompson. “The firebox is surrounded by a water jacket and as it boils, the steam rises and moves through super heater units and then down into the cylinders to move the train.”

The Candy Cane Express, owned and operated by the Oregon Coast Scenic Railroad, takes on passengers at the Garibaldi Depot up to three times on select December weekends — 10 a.m., noon and 2 p.m. — for a one-hour ride along the coast.

The steam engine pulls three passenger cars plus the caboose, and that’s where you’ll find OCSR conductor Dennis Murphy. He said that the rail ride is “big, noisy, and bounce-around,” but it’s also “every kid’s dream!”

“It’s one thing to read about a railroad in a book or see them in a museum, but quite a different experience to see them come alive with the steam billowing out of the auxiliary systems and pistons,” Murphy said. “When you see that, you never forget it!”

The Christmas Train rolls along a 3-mile stretch of track from Garibaldi to Rockaway Beach at a jaunty 10 miles an hour for a most pleasant railroad experience.

“We go right along the water,” said Murphy. “We keep moving north and we go across a lake with water on both sides of the rail, and of course we roll right into downtown Rockaway Beach. It’s just good fun.”

Suddenly, a jolly old man decked out in red from head to toe greets young and old with a huge smile.

“Oh, there’s somebody I need to see,” said the man in the bright red suit. He offered that the Christmas Train isn’t so much about him, but the people he meets along the way.

“If I can get a smile out of a child, well, that’s all the reward anyone could ask for.”

Young Keegan Ragan loves to ride on trains because the slowpoke, 10-mile an-hour ride lets him see more of the coastline.

“When our family travels, it’s always by car and cars are small. Aboard the train, I don’t have to sit in one seat, because there are many to choose from and with trains you don’t have a seat belt,” said Ragan. “You can get up and move around and I just like that!”

His parents, Martha and Brad Ragan, agreed that just like many other youngsters, their son has been absolutely hooked on train travel.

“Oh yeah, Keegan has lots of Thomas trains, model trains, electric trains, Lego trains. It’s his thing, something he’s always been interested in and it hasn’t faded at all over time either. So, this is a perfect trip for our family.”

“Passengers enjoy hot cocoa, Christmas cookies in a nice warm spot that’s out of the rain and wind that we sometimes get here this time of year,” noted Murphy.

Engineer Thompson added, “This ride allows passengers to see that coast, enjoy some down time and even meet Santa Claus, while I take care of the driving. It is a terrific time!”

Be sure to watch the weekly half hour program of Grant’s Getaways. The show airs each Saturday and Sunday on KGW.

For something different, you can follow my Oregon adventures via the Grant’s Getaways Podcast. Each segment is a story-telling session where I relate behind the scenes stories from four decades of travel and television reporting.

You can also learn more about many of my favorite Oregon travels and adventures in the Grant’s Getaways book series, including:

The book collection offers hundreds of outdoor activities across Oregon and promises to engage a kid of any age.

You can reach me: Gmcomie@kgw.com